Myanmar's military clashed with resistance forces in the central Magway region after members of the ousted government called for a nationwide uprising. 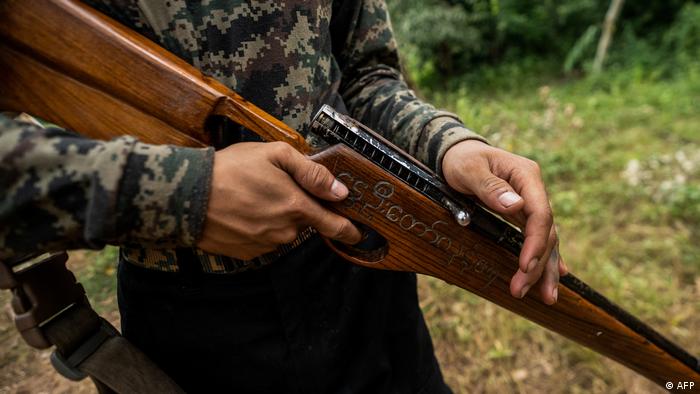 In some areas of Myanmar, locals have formed "defense forces" to fight back against the military coup

At least 15 villagers, mostly teenagers, died in Myanmar this week during fighting between the military and civilian defense forces, local media reported on Saturday.

Myanmar Now web portal said over 100 troops were deployed to secure a village in the central region of Magway when the fighting began earlier this week.

Thursday's clashes came two days after a call for a nationwide uprising by the National Unity Government, which claims to represent the elected government ousted after a military coup in February.

Locals fled to a monastery

The dead included 13 villagers with the resistance forces and four civilians, Myanmar Now reported. Some reports put the death toll at 20 or more.

The Associated Press, citing a villager, said a lightly armed self-defense militia fired warning shots but could not stop the soldiers from entering the area and clashes continued after that.

DPA news agency cited another villager saying that many people sheltered in a nearby monastery during the clashes.

"They used heavy artillery and guns to kill, but the village defense forces had only hand-made rifles. They also burned the houses in the village," he said.

The National Unity Government's (NUG) call on Tuesday for a "people's defensive war'' has received an enthusiastic response on social media, but its actual impact on the ground has been limited and is hard to measure.

The NUG is made up of dissident lawmakers in hiding or exile, many of them from ousted leader Aung San Suu Kyi's party.

Myanmar has been in political turmoil since the military staged the coup on February 1.

The coup sparked a peaceful protest movement, which in turn prompted a harsh military response, leaving more than 1,000 people dead, according to activist group Assistance Association for Political Prisoners.

The government this week claimed resistance forces have been responsible for the deaths of 933 people, Popular News reported, citing the deputy interior minister.

The minister said those killed included security personnel, civil servants and people believed by the resistance to be government informers.

Firebrand anti-Islam monk Ashin Wirathu was jailed last November by the government of ousted leader Aung San Suu Kyi. Now, the charges against him have been dropped without explanation.

Myanmar: Mosque steps in to help amid COVID crisis