Britain has advised its citizens to leave Myanmar as authorities react with increasing severity to daily protests. The United Nations has said the junta is likely committing crimes against humanity. 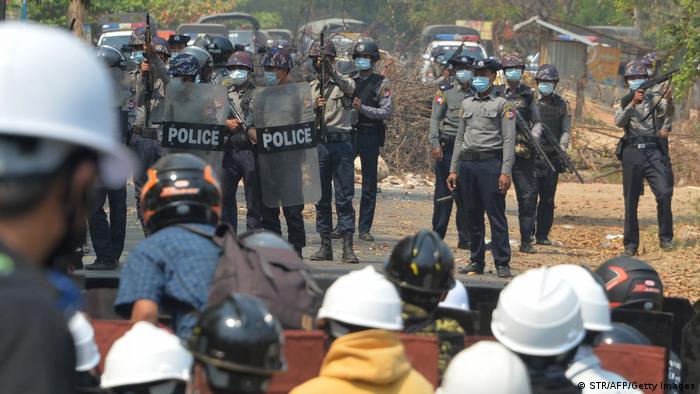 Police armed with weapons have faced off with protesters during demonstrations

The UK Foreign Office on Friday told its citizens they should leave Myanmar as violent repression of protests in the country turns increasingly deadly.

The warning came as the United Nations said the military junta was likely committing "crimes against humanity" in an attempt to keep its grip on power.

What was the UK's advice on Myanmar?

The UK Foreign Office said Britons should leave Myanmar because of escalating violence, unless there was an urgent need to stay.

"Political tension and unrest are widespread since the military takeover and levels of violence are rising," a statement said.

"The Foreign, Commonwealth & Development Office advises British nationals to leave the country by commercial means unless there is an urgent need to stay."

While Myanmar's military has suspended normal commercial passenger journeys, relief flights are available, most of which can be commercially booked.

The UK has said anyone who cannot leave the country is advised to stay indoors and safe, avoiding crowds if they do need to leave home for essential reasons.

Mass demonstrations have taken place across Myanmar since a military coup at the beginning of February. Protesters are demanding the reinstatement of the country's elected civilian government headed by de facto leader Aung San Suu Kyi.

At least nine protesters were killed in different parts of the country on Thursday, with five of them shot in the head, according to a witness.

The UN's Special Rapporteur on human rights in the country, Thomas Andrews, gave a bleak assessment of the crisis.

He told the UN Human Rights Council in Geneva that the country was "controlled by a murderous, illegal regime" that was likely committing "crimes against humanity."

He told the council the offenses likely included "acts of murder, enforced disappearance, persecution, torture." These appeared to have been carried out with "the knowledge of senior leadership," including junta leader Min Aung Hlaing.

'Crimes against humanity are being committed'

In an interview with DW later on Friday, Andrews emphasized: "Crimes against humanity are being committed as we speak."

While Andrews stressed that such offenses could only be determined in a court of law, he added that there was clear evidence of crimes by the junta and that these were "widespread" and part of a "coordinated campaign."

Andrews said he "urged the members of the Human Rights Council to take a look at the definition of crimes against humanity and then look at the way in which the people of Myanmar are being brutalized."

As the military continues to use deadly force against peaceful protesters, Andrews calls for more of a concerted effort by the international community.

Coordinated UN Security Council action against Myanmar's military have been hampered by China and Russia.

The Associated Press reporter was arrested while photographing anti-coup protests. He now faces charges punishable with up to three years in prison.