A third of a century after facing off against a violent military regime, protesters in Myanmar are still on the streets. The flash protests show no signs of stopping. 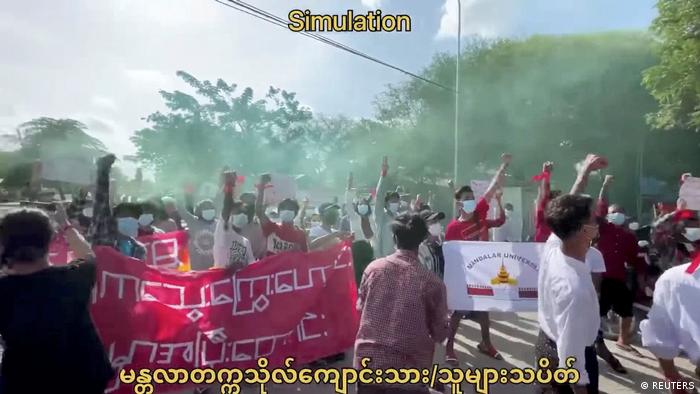 Protesters came out in cities across Myanmar on Sunday to protest against the military junta and to mark the 33rd anniversary of an uprising against military rule that was violently put down.

People took to the streets in the main cities of Yangon, Mandalay, Sagaing and others, local news reported. The military has faced ongoing popular opposition since it launched a coup in early February that ousted the elected government and civilian leader Aung San Suu Kyi.

Protesters remembered the thousands of people, many of which were students, that rose up against military rule in 1988. That uprising was crushed in a bloody crackdown.

"Thirty-three years ago today, they [armed forces] killed many civilians and they are still killing the people," Thet Naing, a protester in Yangon, told the Deutsche Presse-Agentur news agency.

Demonstrations against the current junta have also faced violent responses from the military. According to a local monitoring group, over 900 people have been killed in clashes with the military.

The regime has not, however, been able to quell the protests. Activists have been organizing flash mobs that quickly rally to express popular dissent and then melt away before armed forces can react.

They also organized online campaigns, bringing people out, dressed in red, to show the eight-finger salute, which has become one of the symbols of the protest movement, and to hold banners saying: "Let's return the old blood debt of 1988 in 2021."

The military dictatorship 33 years ago responded to the massive pro-democracy movement by firing on protesters and jailing thousands of people.

The movement launched Aung San Suu Kyi — who was arrested at the time of the putsch and is facing a series of charges including possession of illegal walkie talkies — as a pro-democracy activist. She was known for being the daughter of General Aung San who had fought for independence from the British empire.

"In 1988, our country sacrificed a lot — many people lost their lives. But the dictatorship is still alive," Ko Sai Win, a protester in Mandalay, told the AFP news agency. "It is like a black shadow on our country."