Myanmar on brink of economic collapse one year after military coup | Asia | An in-depth look at news from across the continent | DW | 01.02.2022

Myanmar on brink of economic collapse one year after military coup

A year after the military seized control of the country, Myanmar is facing a "multidimensional humanitarian crisis," the International Labour Organization has warned. 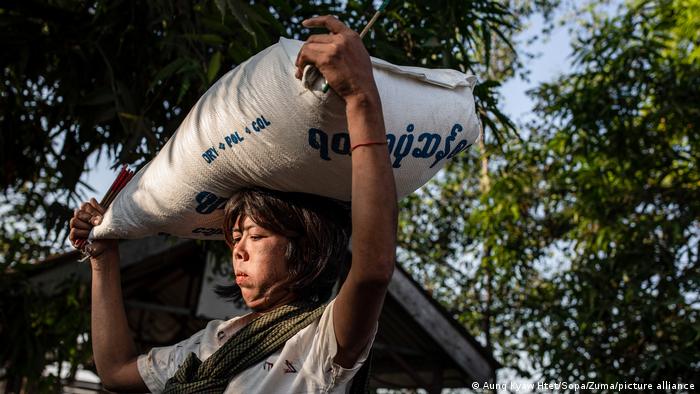 An estimated 14.4 million people in Myanmar are now in need of humanitarian assistance

"In the past, I used to buy breakfast from a tea shop near my office after early check-in at the office. Now, I skip my breakfast and eat my lunch early which I prepare and bring from home," Ma Aye told DW.

"So, instead of eating breakfast and lunch," Ma said, "I eat brunch nowadays to cut my spending."

On social media platforms, people who face economic hardships share tips on how to save coins in daily life.

But Aye considers herself among the luckier ones. Unlike many around her, she still has a job.

Nearly half of population living in poverty

Myanmar's annual employment losses in 2021 amounted to an estimated 8%, or 1.6 million jobs lost, indicating a sizable decrease from employment of 20.5 million in 2020, the International Labor Organization (ILO) stated in its January 2022 report. The estimates cover the whole labor force of Myanmar, including formal and informal economy workers.

The country's construction, garment, tourism and hospitality industries were among the hardest hit, according to the report, as were rural farmers.

In addition, an estimated 25 million people (almost half Myanmar's population) were living in poverty by the end of 2021, and 14.4 million people are now in need of humanitarian assistance, the ILO reported.

The World Bank, meanwhile, said in its January report that Myanmar's economy is about 30% smaller than it might have been in the absence of the pandemic and the military coup.

International sanctions, a halt in foreign aid and the withdrawal of foreign investors have all pushed Myanmar to the brink of economic collapse.

Ongoing political turmoil and conflict between the military and armed resistance groups have also complicated the socioeconomic and public health challenges of the pandemic. Businesses all over Myanmar are facing bankruptcy.

Millions of people, including civil servants and private sector workers, have joined Myanmar's civil disobedience anti-coup movement, refusing to pay electricity bills and taxes until the military is ousted.

Businesses, especially factories, have also suffered from daily power outages. As most of Myanmar's electricity generation depends on hydropower, dry season will prove to be an additional challenge.

"This summer will be really tough. There will be longer and more frequent blackouts," Ko Oo, a business owner, told DW.

"I cannot use generators to run my factory as gasoline prices are sky high. I will only operate only when power is on. My production capacity would be greatly reduced," Ko Oo said.

Children living in poverty on the rise

The number of people living in poverty in Myanmar is expected to have more than doubled from before the pandemic, according to the World Bank.

Min Maung, 40, told DW that he is concerned about a surge in child poverty in Yangon.

"Since COVID, we have started to see an increase of child beggars at traffic lights," he said.

"After the coup, many more showed up. Only when you give money, they will leave. Now I am getting afraid to stop at traffic lights," he added.