Two more reporters have fallen victim to Myanmar's crackdown against independent journalism. Around 100 journalists have been arrested since the coup. 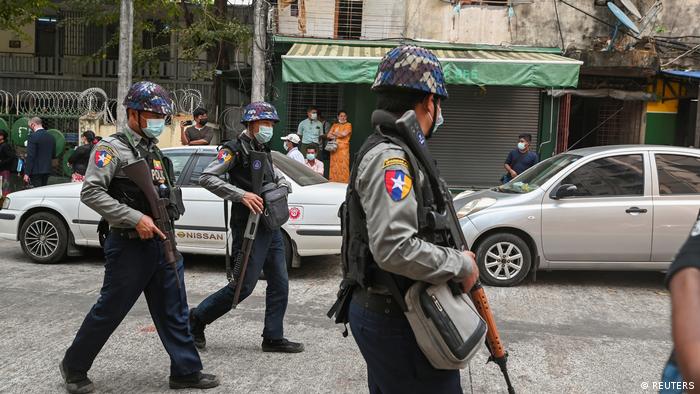 The military junta has met dissent and opposition with violence

The military junta in Myanmar continued its crackdown on the media with the arrest of two more local journalists, the army-controlled newspaper Global New Light of Myanmar reported on Sunday.

Authorities arrested Sithu Aung Myint, a commentator with the US-backed Voice of America radio and a columnist for the Frontier Myanmar news site, and Htet Htet Khine, a freelance producer working with the BBC.

BBC Media Action shared a statement in response to the arrest over Twitter, saying: "We are concerned by the detention and charges against our freelance producer, Htet Htet Khine, in Myanmar."

Sithu Aung Myint was charged with spreading false information that was critical of the military regime as well as supporting recent strikes and banned opposition groups.

Htet Htet Khine was charged with harboring Sithu Aung Myint as well as supporting a shadow National Unity Government that opposes the junta. The two were arrested on August 15, Myawaddy TV reported.

The head of the Asia desk for Reporters Without Borders, Daniel Bastard, said the pair had no communication with the outside world. "We strongly condemn the arbitrary conditions of their detention, which reflect the brutality with which the military junta treats journalists," he added.

The junta has taken repressive actions against local and foreign media amid ongoing protests since their coup on February 1. Human Rights Watch reported last month that the military had arrested 98 journalists since coming to power.

A report published by the Committee to Protect Journalists last month said that independent journalism had been effectively criminalized in Myanmar.

Security forces have also come down hard on protesters, killing over 1,000 in violent clashes, according to activists.

The junta launched its coup after claiming that last November's elections had been marred by fraud. They then closed down the parliament and arrested the country's elected leader Aung San Suu Kyi.