A Myanmar court has sentenced a New Zealand man and two local colleagues to more than two years in jail for breaking a religious law. The men had used a picture of Buddha wearing headphones for an online promotion. 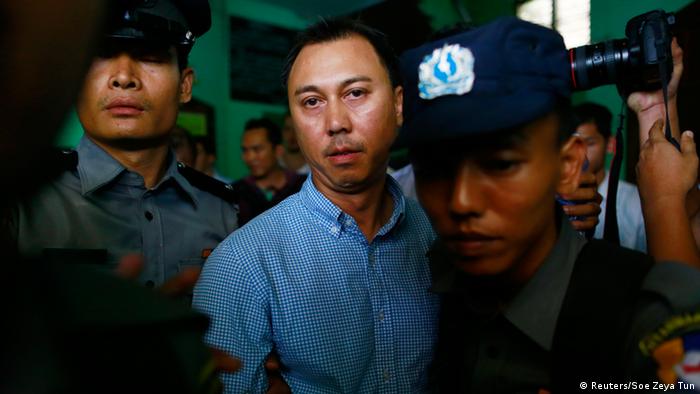 A Yangon court on Tuesday sentenced a New Zealand bar manager and his two local colleagues to more than two years hard labor for insulting Buddhism by using the embellished image of the iconic sage to promote cheap drinks.

The trial centered over a social media posting promoting the V Gastro bar in the former capital city, in which a Buddha was depicted wearing a pair of DJ headphones amid psychedelic colors.

The bar subsequently deleted the post and wrote an apology on the Facebook page, saying it had no intention of causing "offence to anyone or toward any religious group."

But that didn't satisfy authorities, which prosecuted bar manager Philip Blackwood, 32, of New Zealand and his two Myanmar colleagues, owner Tun Thurein, 40, and employee Htut Ko Ko Lwin, 26, in December and charged them under the Religion Act, legislation that criminalizes written insults to religion.

Judge Ye Lwin said that despite the apology, Blackwood had "intentionally plotted to insult religious belief" when he uploaded the image to Facebook.

About half a dozen monks and hard line Buddhists gathered outside the Yangon court and applauded Tuesday's verdict.

"The verdict is fair," said Paw Shwe, a member of a Buddhist organization. "This punishment will deter others from insulting Buddhism or other religion."

Sectarian violence on the rise

"What this shows is freedom of expression is under greater threat than ever in Myanmar, just as the country heads into a pivotal election year," said Phil Robertson, deputy Asia director of Human Rights Watch. "The Religion Act should be amended to bring it into compliance with international human rights standards.”

After the sentencing, Blackwood told reporters he would appeal before police ushered him away.