Violence against Muslims in Myanmar has triggered international outrage. A report by UN Special Rapporteur Tomas Ojea Quintana stresses the necessity and urgency for the government in Naypyidaw to find a solution. 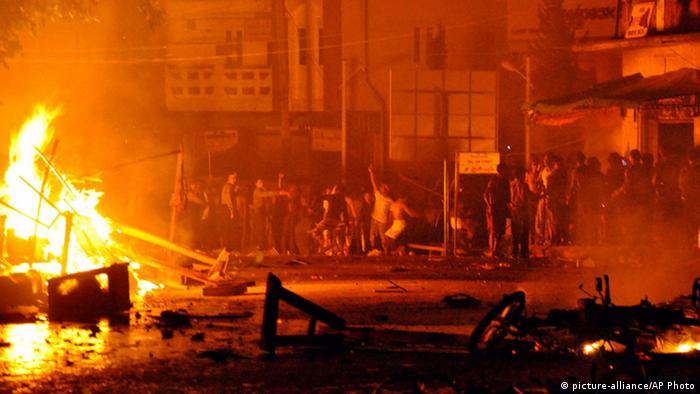 "It is always the same pattern. A few days ahead of time, there are rumors about which mosques will be hit. Then, on the evening it happens, there is a power cut and the telephone lines go dead. Shortly after midnight, or in the early hours of the morning, is when it happens. Armed forces attack while singing the national anthem. Their message is clear: this is our country, it does not belong to you." Daw Khin Myo Aye, a Muslim woman with Chinese roots, describes the attacks carried out in Myanmar against Muslims, which she claims are organized from the very top. She believes the religious minority is a pawn for powerful interest groups who wish to disturb the opening up of the country.

Radical nationalist monks, on the other hand, have accused the Muslims of wanting to take over power and of marrying Buddhists to force them to convert. The monks belonging to the so-called "969 Movement" have called upon the Buddhist section of society to boycott Muslim shops. The group's pamphlets and DVDs have sold well throughout the country. 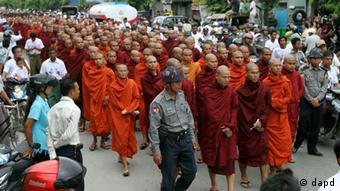 The accusations made by the 969 Movement seem to have been pulled out of thin air. But they do coincide with a history among some Buddhists of hate speeches and violence, which has existed for decades in Myanmar, according to a report published in October this year by the International Crisis Group (ICG).

The NGO also comes to the conclusion that the accusation made by many Muslims that systematic violence is meant to undermine the development of the country is improbable. "So far, there is no proof that the violent riots have been organized to destabilize the country," the report reads.

In June and October 2012, nearly 200 people were killed in clashes in the northwestern state of Rakhine. A further 140,000 people, mostly Muslims, were driven out. At the beginning of 2013, Central Myanmar was also gripped by violence. During two days of rioting, at least 44 people died.

Tomas Ojea Quintana, UN special rapporteur on the situation of human rights in Myanmar, who will present his report to the UN on Friday, October 25 in New York, told DW, "Violence against Muslims - not only against the minority Rohingya group, but against Muslim citizens in the whole country - has increased in intensity and dimension."

The conflict is aggravated by the police, which sides with the Buddhist majority. "The government and police have been widely criticized, domestically and internationally, for the poor response by security forces to the violence, which in many cases was clearly biased and woefully inadequate," the ICG report states.

"They appeared to lack the training, equipment, and rules of engagement or leadership that might have enabled them to contain the situation and restore order more quickly, potentially saving many lives." 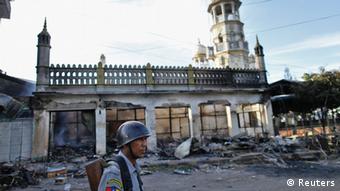 Entire Muslim communities have been wiped out

"One could see the problem coming," says Bangkok-based historian and Myanmar expert Jacques Leider. The conflict, according to him, goes back to colonial times when a great number of people from British India, mostly Muslim, settled in Myanmar. Of course, there had been Muslims in Myanmar before, but during British colonial rule, the ethnic balance shifted, he adds.

The British gave them posts in administration and some of the immigrants became successful in trade and finance, which led to envy among the locals. And then immigrants started going to Myanmar illegally, especially to Rakhine state, which led to considerable social tension, according to Leider.

"After independence, these social tensions were never seriously confronted by the government and the problems have basically carried on to today."

"The depth of anti-Muslim sentiment in the country, and the inadequate response of the security forces, mean that further clashes are likely," says the ICG.

Opinions differ on whether or not this will jeopardize the development of the country. While the West measures progress in terms of human rights by the treatment of ethnic minorities, as the criticism of Aung San Suu Kyi shows, Muslims in the country make up just over 3.5 percent of the population and thus have no real weight in politics.

Leider compares the situation to southern Thailand, where for years there has been a conflict between the Muslim minority and Buddhists. Both, according to him, will "remain a chronic problem for many years to come." 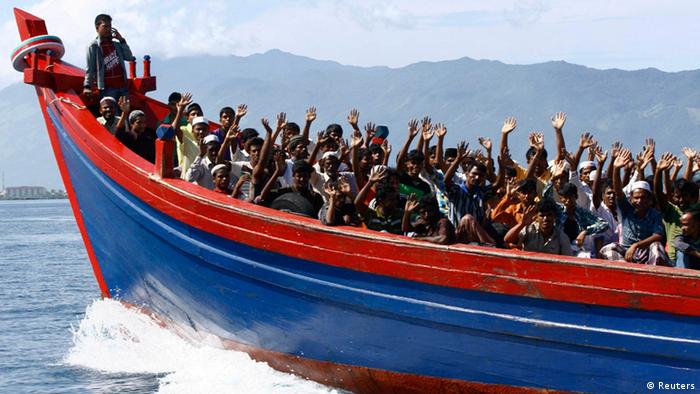 Neighboring countries have been putting pressure on the Burmese government to find a solution because they fear the tension could increasingly have a regional impact. More and more Muslims are fleeing Myanmar and going to Bangladesh, Thailand, Malaysia and Indonesia. In the east of Bangladesh, more refugees would only make living conditions worse for the refugees who are already there. Thailand fears the trend will exacerbate its own problems while Malaysia and Indonesia are showing more and more solidarity with fellow Muslims in Myanmar.

UN Special Rapporteur Quintana emphasizes that the government in Naypyidaw has the responsibility to "fight the virus of inter-religious violence" and that would mean politicians standing up for religious freedom. President Thein Sein's recently announced "zero tolerance" policy against religious violence is not enough, says Quintana. "The Burmese must face their history and accept that part of their population is Muslim."

Human Rights Watch has published a report claiming ethnic cleansing against Rohingya Muslims in the state of Rakhine in Myanmar. The document, based on field interviews, says authorities encouraged the actions. (22.04.2013)

Aung San Suu Kyi's National League for Democracy party, which was banned under Myanmar's junta for decades, will have its first party congress from March 8 to 10 to set the course for 2015 elections. (07.03.2013)