Extremists misuse Buddhism to incite hatred against Muslims not just in Myanmar, but also Sri Lanka and Thailand. There are growing concerns about how this might affect people's view of this pacifist religion. 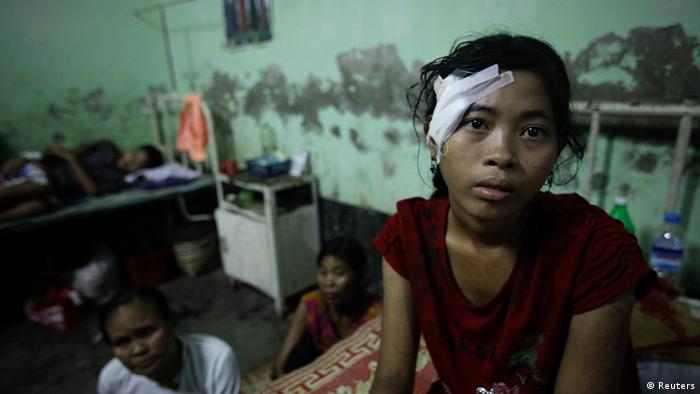 Time Magazine's latest issue 'The face of Buddhist terror' has been banned in Myanmar and Sri Lanka for fear it may stir further religious hatred. Violence by angry Buddhist mobs has left minority Muslim populations in the two countries bleeding over the past eighteen months.

In Myanmar, also known as Burma, two periods of terror in 2012 across Rakhine State saw nearly 200 Rohingya Muslims killed and hundreds of thousands flee their homes. Human rights groups say the hostilities towards the Rohingya were stoked up by local leaders and that several monks had taken part in the rampage.

The violence spread to the central city of Meikhtila in March this year, where 42 people were killed. Attacks on Muslims continue to this day in several areas, in part because of the sermons of spiritual leader Ashin Wirathu - the focus of Time magazine's story. 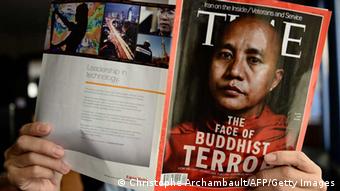 Wirathu, who describes himself as the "Burmese Bin Laden", has used speeches on social media to spread the message of the '969' movement - an ultra-nationalist group characterized by one media outlet as "Myanmar's Neo-Nazis".

One of their campaigns involves the demand that the local Buddhist population displays '969' stickers and posters in shop windows, homes and on public transport. The three digits have even been spray-painted on the burnt out remains of Muslim-owned stores. Wirathu has also called for the remaining Muslim-owned businesses to be boycotted and inter-religious marriages to be restricted.

Many commentators question why a strictly non-violent religion has been so easily used to stir up such hatred. Some think that Myanmar's recent past under almost five decades of military dictatorship has played a large role.

"People didn't get protection from the state, under the military junta, in fact the state was the threat," said Debbie Stothard from the human rights group ALTSEAN. "Your religious identity and ethnic group became a source of protection and that identity is still very important." 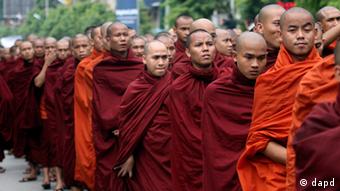 Stothard told DW that a sense of fellowship explains why Myanmar's dominant religion has become an entry point for the creation of an extremist nationalist movement against Muslims who make up four percent of the population.

Sri Lanka, another Buddhist majority country, has seen several Buddhist monks endorse religious hatred. In April last year, some joined the storming of a mosque claiming it had been built on sacred Buddhist land. Earlier, a nearby Muslim shrine was demolished by a crowd led by a monk.

"It is fear that fires up this anger and it is often politicians that are behind it," said Ajarn Sulak Sivaraksa, one of the founders of the Bangkok-based International Network of Engaged Buddhists (INEB).

In Sri Lanka, one extremist Buddhist group (Bodu Bala Sena) has the support of Defense Minister Gotabhaya Rajapaksa, the brother of President Mahinda Rajapaksa. In Myanmar, one of the key people spreading hatred on social media is reportedly a director in the president's office, who goes by the nickname Hmuu Zaw.

Camouflaging themselves among Rohingya refugees, many Bangladeshi men are taking risky and secret boat trips to Malaysia, seeking work there as illegal immigrants. (19.11.2012)

Ajarn Sivarsaksa told DW that this type of Buddhism, "whether in Sri Lanka and Burma now or in Japan in the past, identifies itself with nationalism which is very dangerous."

Thailand has also seen Buddhism used to endorse violence against Muslims. The army, which has been fighting an insurgency led by Muslim separatists in its three southernmost states over the past decade, has reportedly used Buddhist temples to store weapons and ammunition. The buildings have even been used to interrogate rebels, according to US scholar Michael Jerryson.

Although southern Thailand is a Muslim-majority region which has left its Buddhist population marginalized, many academics are uncomfortable with the use of Buddhist facilities for military purposes. "I don't like the idea at all," said Professor Suwanna Satha-Anand from the Buddhist Philosophy department at Bangkok's Chulalongkorn University.

Professor Satha-Anand said Myanmar monk Wirathu is not the first respected Buddhist figure to spread hate speech. Another example can be found in the 1970s when there was a great fear about the spread of Communism in Southeast Asia.

"At that particular time, a well known Buddhist monk gave interviews saying that killing communists was not a sin. It seems whenever the Thai nation has faced a critical time, Buddhism has been used to justify certain types of violence," he said.

In Myanmar the spread of hatred and intolerance has left Muslim communities in a state of paranoia, it has also left moderate Buddhists with a sense of unease. "We've seen moderate Buddhists killed by Rakhine nationalists, simply because these people sold rice or provided some sort of humanitarian service to the Rohingya," said Stothard. "In some communities, moderate Buddhists are far more afraid of the extremist '969' movement than of Muslims in general," she added. 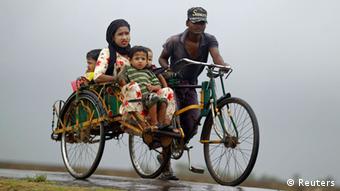 Thousands of Rohingya have fled Myanmar since the violence began

Professor Satha-Anand thinks Buddhism needs to keep a "comfortable distance" from the state. She is concerned about how the current religious interventions across the region will affect the world's view of Buddhism.

"I want to know how the majority of Buddhists, who are pacifist, are going to respond to this? They should come out and say something. Otherwise people will think that this violence represents Buddhism, which it does not."