Having missed the last two Olympics, Iranian canoeist Saeid Fazloula has been named on the refugee team for the embattled Tokyo Olympics. He has been training in Germany and his hard work has finally paid off.

On a rainy day, the Rhine harbors in Karlsruhe with their old silos and cranes don't exactly look appealing. But one of the 120-year-old artificial basins is also a place where sporting careers are forged: Container vessels share the 700 meter-long dock with canoeists of the Rheinbrüder canoe club, one of Germany's federal training centers.

Saeid Fazloula has just completed his second training session of the day. He lifts his carbon canoe out of the water, shoulders it and carries it back to the garage, where he wipes it down. The canoe sports a black and gold eagle at the bow and the colors of the German flag.

But instead of representing Germany, Fazloula has been training hard to reach the postponed Tokyo Olympics as part of the Olympic Refugee Team. On Tuesday, the International Olympic Committee (IOC) announced that the Iranian was among the 29 refugee athletes named for the Games.

Fearing government repression, Fazloula fled his native Iran in 2015 and ended up in Germany, where he received refugee status. But that wasn't the only obstacle he's had to overcome.

A mix of weightlifting, running, paddling and swimming makes up Fazloula's training regime and that of the 10 other canoeists he trains with several times a day, six days a week.

"We get along very well, they got my back 100%," he says. "Even when some of us don't compete, they still support those who do by training with them. We also meet regularly to eat ice cream or go for a walk. We are one big family."

Despite the supportive atmosphere, Detlef Hofmann, Fazloula's mentor and coach, recognizes that the two greatest challenges – aside from the language barrier – were the completely different training system in Iran and Fazloula's "Persian" mindset.

"While we build on basics in Germany, in Iran it's more a survival of the fittest," the seven-time world champion tells DW. "Even more challenging was the difference in mentality, for instance dealing with defeats. In Iran, the approach is based on a lot of emotions and pressure. But failures are actually opportunities to learn." 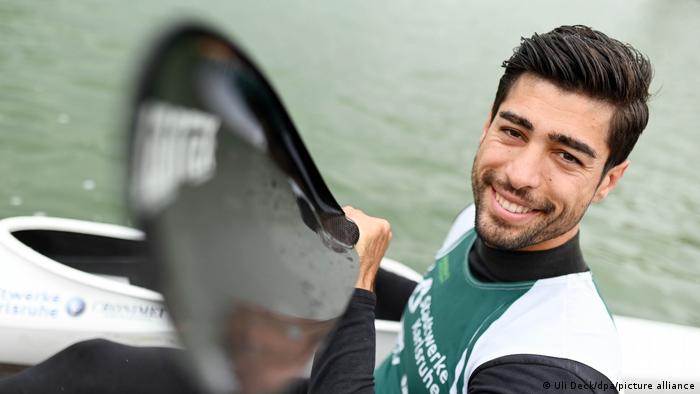 Saeid Fazloula was a celebrated canoeist in Iran before making the move to Germany.

Falling foul of the regime

Growing up by the Caspian Sea, Fazloula was a celebrated canoeist before he fled. "I had everything I wanted in Iran – money, a car and an apartment," he says.

Fazloula won silver for his home country's national team in the 2014 Asian Games. A year later, he fell foul of the regime's regulations when he took a selfie in front of Milan's famous cathedral after competing at the world championships. That picture led the regime to accuse him of having converted to Christianity; upon arrival in Tehran, he was detained for two days and threatened with the death penalty.

Fazloula left Iran first by foot across the border to Turkey, then to the Greek island of Lesbos and on to Serbia along the Balkan route all the way to Karlsruhe. After learning German quickly and adjusting to the new training techniques, Fazloula's work ethic and tenacity soon surprised the whole team, says Hofmann.

"I never thought he'd make the German national team, but then we saw him train until he dropped; that in turn motivated the team, which paid it back to him by integrating him." 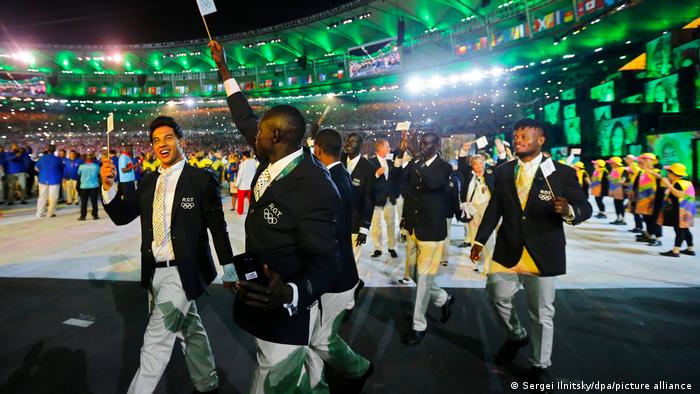 The inaugural Refugee Olympic Team at the Rio Games in 2016.

In 2015, the International Olympic Committee (IOC) announced the creation of a refugee team for the Rio Olympics. That year, more than a million refugees entered Europe after fleeing wars in the Middle East, Africa and central Asia. Competing in athletics, swimming and judo, the squad was one of the feel-good stories of those Games.

Five years later, six refugee athletes from Rio are back on the Refugee Olympic Team (ROT) in Tokyo, plus several more including Fazloula across a range of sports.

Members of the ROT were selected "first and foremost on each athlete's sporting performance and their refugee status as confirmed by UNHCR," IOC spokesperson Anne-Sophie Thilo told DW. "Personal background as well as a balanced representativity in terms of sport, gender and regions will also be considered," she added.

In addition to a $1,500 monthly stipend paid out from January until the end of the Olympics in early August, each refugee team member and those who were considered but did make the Games are eligible for help transitioning to a post-sports career and media training, among other things. So far, Fazloula has only met the other team members during virtual meetings, but will see them in person a few days before their collective departure to Tokyo in July, according to the IOC.

"We have a common goal and want to show that together, we are very strong," Fazloula says, his face looking excited. The International Paralympic Committee has a similar team, whose final composition will be announced in late June.

‘Think it, believe it, become it'

After failing to qualify for the 2012 London Olympics with the Iranian national team, Fazloula made it on to the candidate list for the newly-formed Rio refugee team four years later – only to miss out on the actual team shortly before the Games.

Unable to compete in the Tokyo Olympics for Germany after his application for naturalization was rejected, Fazloula was hopeful he would succeed at his third attempt. "Perhaps this is my last chance," the 29-year-old told DW before the team was announced. "It would be a happy end after fighting for it for six years."

When asked what motivates him given all the setbacks, he points to a motto based on a quote by Muhammad Ali: ‘Think it, believe it, become it'.

"If there is one thing I always tell myself, it's this," Fazloula says. "I just have to believe that I will manage, no matter what it is."

Detlef Hofmann, a gold medalist at the 1996 Atlanta Games, is clearly moved when he talks about his protégé's appointment to the ROT.

"It would be a deserved reward. The fact alone that he drove many people [to Lesbos] with a motor boat … it'd be the fulfilment of his inner dream. It would be such a gigantic satisfaction for everybody involved."

With Tokyo still under a state of emergency, opposition to hosting the games is growing. On Wednesday, a top health adviser said it was "not normal" to host them.