Around 60 imams from several European countries are on a bus tour of cities hit by Islamic terrorism in order to condemn extremism committed in the name of religion. Their message is that Islam is a religion of peace. 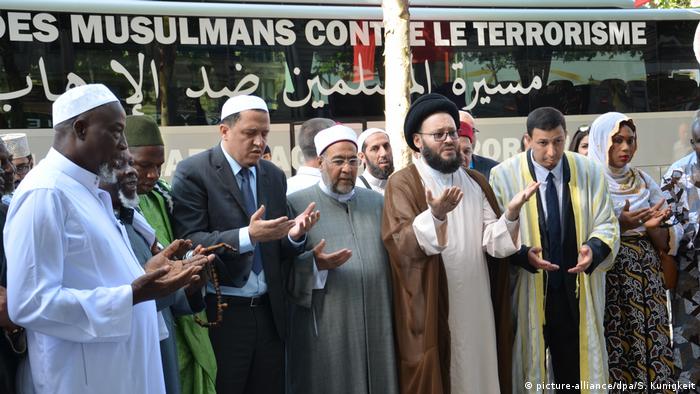 Lower than expected turnout for Muslim anti-terror march in Cologne

A peace march organized by German Muslim groups to condemn terrorism and violence in the name of Islam has been held in Cologne. Organizers had registered 10,000 participants, but actual turnout was much lower. (17.06.2017)

France has been hit by a suspected terror attack days before a presidential election in which security is a top issue. Officials had feared another bloody attack ahead of Sunday's vote. (21.04.2017)

The "March of Muslims against Terrorism" kicked off on Saturday in Paris with a prayer at the site on the Champs-Elysees where a policeman was murdered by an Islamist militant in April.

It is about sending a "message of humanity and brotherhood against terrorism," said Imam Houcine Drouiche from the French city of Nimes.

From Paris, some 60 imams will head by bus on Sunday to Berlin's Kaiser Wilhelm Memorial Church, the scene of December's terror ramming of a Christmas market that killed 12 people and wounded dozens more.

The imams, including six from Germany, will then travel by bus to other cities hit by major terror attacks over the past several years, including Brussels, Toulouse and Nice. The action will end in Paris on July 14 to mark Bastille Day.

Along the tour the imams want to pray for the victims of terrorism and show that Islam can co-exist with other religions and cultures. Organizers want to show that for the vast majority of believers Islam is a religion of peace.

At stops along the way, the imams are expected to be met by political, religious and civil society figures in communities touched by terrorism.

The organizers of the peace march are Imam Hassen Chalghoumi of the Parisian suburb of Drancy and the French Jewish writer Marek Halter.

"It is important that Muslims can express themselves to say that my religion has nothing to do with these barbarians," Chalghoumi said.