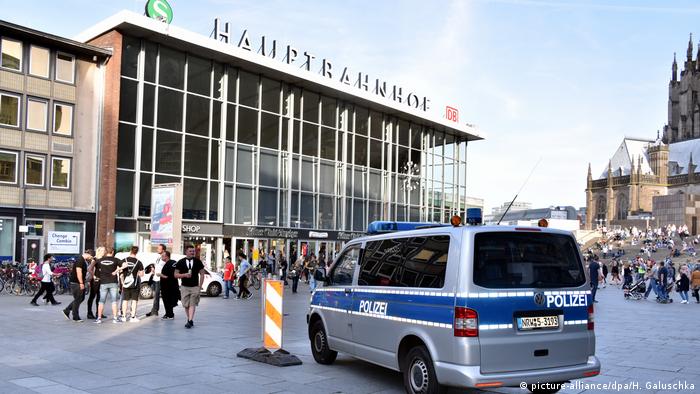 Calls of "Allahu Akbar" ["God is great"] by young Muslims wearing long gowns and vests outside Cologne's main rail station culminated on Wednesday in counter-accusations between city police and the Central Council of Muslims in Germany (ZMD).

Police chief Uwe Jacob denied that his officers were motivated by racism in detaining 10 young Muslim men aged between 18 and 28 inside the station on Tuesday during a one-hour intervention.

Searches done resulted in a one-handed knife being found and infringement proceedings against one person, according to multiple reports.

ZMD chairman Aiman Mazyek said the men were on their way to celebrations to mark the completion of the Muslim fasting month of Ramadan when faced by a "massive" operation by police.

"We condemn the actions of the Cologne police and expect that police officers will be better culturally trained and sensitized and not react in great nervousness to any intended hint from the public about the alleged 'suspicious' behavior of people of other appearances," said Mazyek, adding that apologies were needed.

In Cologne, a city known for its diversity, police should have a minimum of knowledge about "religion-specific things like holidays and tradition," he added.

Eid celebrations in Germany focus on integration and diversity

Police chief Jacob said police were focused on the plaza between the station and the cathedral and reacted to situations "that made people feel anxious and awakened the impression that serious danger loomed."

Jacob condemned what he termed "denigration and insults" directed subsequently at his officers via social media posts.

And, he added, that on the basis of Wednesday's level of knowledge he regretted that "blameless citizens" were caught up in Tuesday's intervention and would offer them personal consultations.

The station periphery was the scene of sexual assaults on women as Germany entered New Year in 2016 after dealing with mass "Balkan route" migrant arrivals - an incident that prompted closer policing on the plaza also adjacent to the city's famous cathedral.

NRW police said in the past two months they had turned out to 129 incidents involving wedding convoys, pyrotechnics and even handgun shots fired in celebration — all prosecutable.