The late David S., who killed nine people during his rampage in Munich a year ago, asked people to refer to him as the "spree killer" long before the shooting. The Iranian-German idolized mass murderer Anders Breivik. 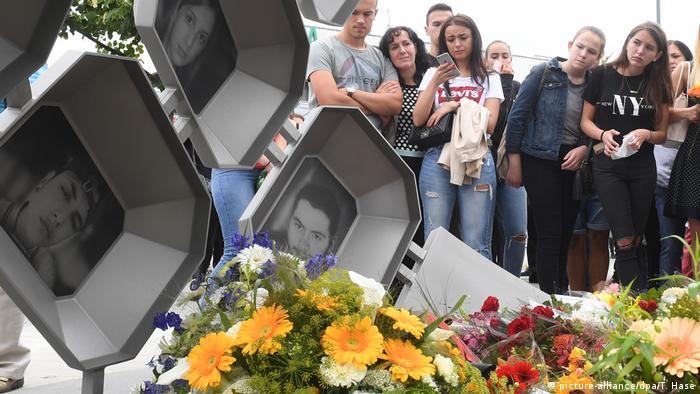 While undergoing psychiatric treatment in 2015, the future Munich shooter "repeatedly" asked his fellow patients to refer to him as the "spree killer," according to the German newspaper Süddeutsche Zeitung. On Saturday, Germany marked the one year anniversary of the massacre with the unveiling of a monument to the nine victims in Bavaria's capital.

New information is still coming to light about the teenager responsible for the July 2016 shooting. Although his family came from Iran, the shooter himself was born and raised in Munich. He considered himself Aryan, claiming that the Aryan race had originated in Iran, and declared to his friends that he was proud to share his birthday, April 20, with Adolf Hitler.

German authorities say that Ali S., as he was known before changing his name to David, signaled his sympathy for the Nazis during his treatment for depression, stress, and social anxiety in one of Munich's clinics. He was 17 at the time.

He reportedly drew swastikas on his note pad and greeted a female patient with the Nazi salute "Sieg Heil." When confronted about it, he said he was not a Nazi, "but believed that some of the things Hitler did were good," according to the investigators.

At the time, doctors and health care professionals apparently did not know that Ali wanted other patients to call him "Amokläufer Z" or the "spree killer Z," Süddeutsche Zeitung reported. However, his carers knew about the teenager's right-wing tendencies and tried to discuss them in therapy. He was also prescribed anti-depressants.

The teenager also occasionally used handles like "spree killer" or "Hass" (Hate) while playing video games online, according to an earlier report by Der Spiegel magazine.

Ali's mental problems were apparently triggered by social isolation and bullying he had suffered at school. He developed xenophobic tendencies, "especially towards youths with Turkish, Albanian, and Balkan origin, whom he blamed for the bullying," authorities have said. He referred to them as "subhuman" and "cockroaches." He researched other spree killers in the run-up to the Munich shooting, including German school shooter and Norwegian right-wing extremist Anders Breivik. At one stage, he had expressed his admiration for Breivik to an Afghan youth.

The teenager changed his name to David after turning 18, and bought a gun and ammunition through the darknet. When searching his computer, investigators also discovered "fantasies" outlining racially-motivated terror attacks.

The 18-year-old killed nine people in Munich on July 22, 2016, exactly five years after Anders Breivik's attack on the island of Utoya. Seven of the victims were teenagers, and the majority had Albanian or Turkish origin. The shooter then killed himself.

Police believe that David S. did not know his victims personally. German media initially speculated that the shooting was motivated by Islamic extremism, following the attack in Nice and a stabbing rampage by an Afghan refugee in Würzburg. These rumors were soon dispelled by the authorities, who said that the Iranian-German shooter had suffered from mental illness.

The Islamist connection was also disproved by an online video taken during the rampage, which shows the attacker on the roof of the building arguing with a bystander on the balcony of a nearby apartment. As the man on the balcony insults him, calling him a foreigner, the teenager responds, "I am a German, I was born here."

Authorities examined the shooter's body after the event and found only small traces of prescribed medication in his system, which suggests that he had stopped taking anti-depressants. Police arrested the man suspected of selling the gun to David S. in August last year. 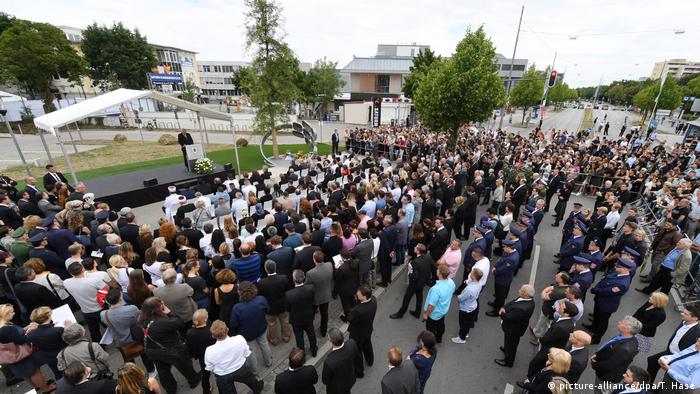 While the investigators initially contributed the shooting to the assailant's mental issues, several German lawmakers urged the police to focus on his political and racial motives. Bavaria's interior ministry published the latest discoveries about the teenager's psychiatric treatment in response to a request by Social Democratic Deputy Florian Ritter, who sits in the Bavarian parliament.

On Saturday, a crowd of some 1,500 people gathered at the commemoration ceremony at Munich's Olympia mall where the killings took place. The site is now marked by a Gingko tree surrounded by a metal ring displaying the names and photos of the nine victims.

Munich mayor Dieter Reiter decried the rampage as an attack on the "vibrant, tolerant city."

"If all shooters and killers have something in common, it is the fact that they want to spread hate and fear," he said in his speech. "But I am saying it loud and clear: this cynical calculation did not work out in our city, or any other cities that also suffered attacks."