In Munich, recovery comes with frustration | Germany| News and in-depth reporting from Berlin and beyond | DW | 25.07.2016

As details emerge about the background of the Olympia shooter, mourners paying their respects outside the shopping center have gone from grief to indignation. A lack of connection to terrorism provides no comfort. 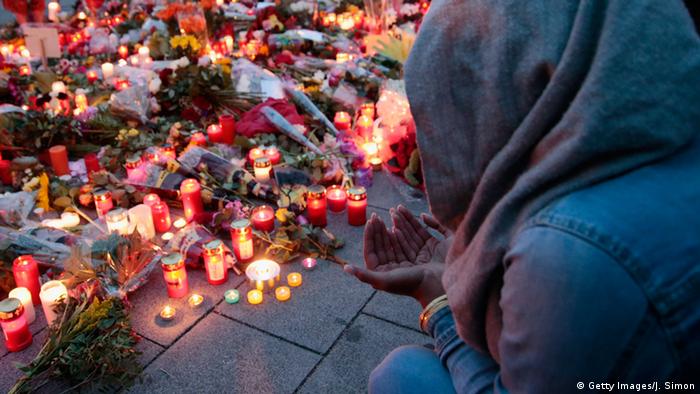 The usual quiet of a Sunday morning in Germany's third-largest city was broken by the sounds of tears, two days after an attacker shot and killed nine people at the Olympia shopping center before turning the gun on himself.

"Why would anyone do such thing?" a woman yelled in front of the growing pile of flowers and candles. "No one can ever get into such a person's mind," another mourner responded.

A teenager who said he lost four friends in the attack was in complete shock. People offered him water, hugs, food - but he requested to be left alone and cry.

A woman began praying in front of one of the improvised memorials, others were talking about the shooter's age and mental state - all trying to understand how an 18-year-old could get hold of such a weapon.

Outside his home in another part of Munich, journalists and passersby gathered, hoping to get a hint from the police who were constantly going in and out of the building. A police vehicle was parked nearby, and multiple officers were seen in the area.

German police have arrested a 16-year-old Afghan friend of the German-Iranian gunman who killed nine people in Munich on Friday. There is suspicion he may have been an accomplice and failed to report the gunman's plans. (24.07.2016)

German police say the teenager who killed nine people during a shooting rampage in Munich had been planning the attack for more than a year. Investigators also said the perpetrator bought his weapon over the internet. (24.07.2016)

"It's a really nice neighborhood here," a man who lives right across the street from the shooter's home told DW. "So don't think that this has anything to do with poverty or crime in the area."

Police confirmed on Sunday that the teenager had been planning the attack for more than a year, and traveled to the German town of Winnenden, in neighboring Baden-Württemberg, where a school shooting took place in 2009.

But the lack of connection to the self-styled "Islamic State" (IS), and the fact that the teen was in psychiatric treatment - even hospitalized - did not reassure the mourners.

"This is simply unbelievable. An 18-year-old teenager - a child really - gets a gun, plans an attack for over a year and carries it out and no one pays attention," said 16-year-old Marie, who came to the Olympia mall to pay her respects.

"IS or no IS - this is completely scary. Didn't he have better things to do?"

In the street where the perpetrator's family lives, a neighbor came downstairs to speak his heart. He said he's Iraqi, but has lived in Germany for 30 years, since he was 4 years old. He moved to Munich from the north of Germany for work, and stayed.

"I just came to say that I find this act horrible. I can't believe it happened here - but I also want to be treated normally," he told DW.

He is not afraid, he said, just sad and shocked by the amount of police in his street. "Don't ask me why this kid did what he did. I'm as devastated as you are."

Meanwhile, authorities have raised the number of injured people from 24 to 35. "Luring people on Facebook, carrying 300 bullets, reading about mass shootings in your free time? Sorry - I refuse to understand this," said one mourner in tears, lighting another candle. "No one can."