Multaka project provides tours of museums in Berlin to refugees | Germany | News and in-depth reporting from Berlin and beyond | DW | 14.06.2017

Multaka project provides tours of museums in Berlin to refugees

A project in Berlin aims to provide newly- arrived Arabic-speaking refugees free tours of museums in Germany's capital. It also trains the refugees to be volunteer tour guides. 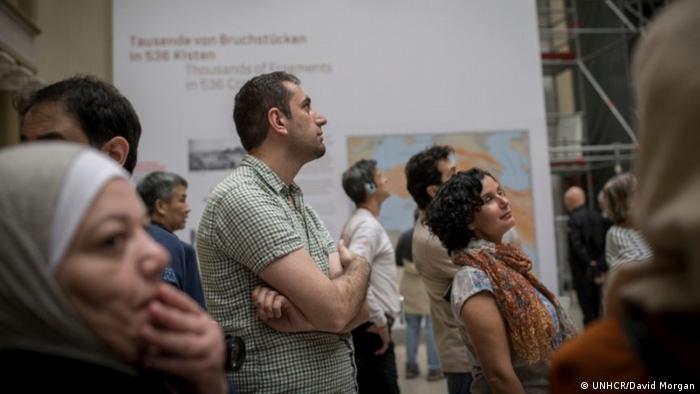 The project, titled "Multaka" or "meeting point" in Arabic, was started a little over a year ago by Stefan Weber, the director of the Islamic Art Museum at the Pergamon Museum in Berlin. The Pergamon Museum is one of the most important museums on the "Museum Island" in the country's capital. Other prominent museums on the island where Multaka tours take place include the Bode-Museum, which features Byzantine art, the Near East museum and the German History museum. The tours take place at 3 pm (CET) in the afternoon on Wednesday and Saturdays.

"You can enter the museum for free and I will be accompanying you to tell you about the exhibits in Arabic," Kefah Ali Deeb, a renowned writer and artist said at the door of the Near East Museum. She herself is a refugee: having fled to Berlin from Syria in fall 2014.

Opportunity to come closer to Germany

Kefah, along with 19 other refugee volunteer guides involved in project, take an interest in history, archeology and the fine arts. They've been trained to lead tour groups to other refugees who might only be able to follow the tour in Arabic. The guides help them learn more about the exhibits in their native language.

"The tours are important in bringing confidence to the refugees. It shows them that anyone in Germany can enter museums and that they can engage in cultural activities without the fear of not understanding what they are observing. When I first came to Berlin, I did not know if I was allowed to enter museums and I didn't have the courage to enter them. So when I heard the idea of the project I found it great because I thought that maybe it could help other refugees like myself," Kafah Ali Deeb told InfoMigrants.

The group passed through the entrance of the Ishtar Gate, a relic from the Babylonian civilization in Iraq which stood in the middle of a large hall. The visitors from Syria and Iraq were familiar with the Gate and the other Babylonian relics as they came  from the same region. Due to the visitors'  familiarity , the tour guide asked questions of the visitors  to help stir up their imagination and provide them with a deeper understanding of the artifacts being displayed. 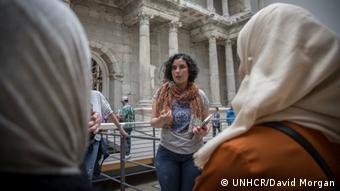 A chance to learn more about home

"There are usually around 10 to 30 people in each tour group and many of them go more than once in order to go with different guides to get more information. Some of them come again and bring their friends, who then go on to the rest of the museums," Kefah says as she moves in front of of a Gate of the ancient Greek city of Melitus. She then explains the importance of the private sector in the construction of cities in ancient times and then leads the group through the Assyrian procession street.

Many of the museum's original pieces were taken from Iraq or the Levant, which is surprising to many of the visitors ."I was afraid that this would make the visitors sad, but on the contrary, they were happy to see these relics and artifacts in good condition," Kefah said.

"The tour is more than wonderful and the most important thing is that it is in Arabic," one of the Syrian visitors in the group said."All of this civilization was in my home country and now I get the chance here to learn more about it," he said.

In the Assyrian halls of the museum, Kefah tells stories about kings and guides the group through paintings and sculptures of the era. She explains the religious and economic connotations of the exhibits and continues to ask questions and initiate discussions with the visitors.

She considers the tour to be different, as it is not just learning about the exhibits, but helping the newcomers integrate into German society. The tour is an opportunity for them to meet new people in Germany and by the end of each tour they make new friends. They often go outside to a garden next to the museum and continue their conversations there.

The project has been awarded the German Prize for the best project promoting integration of refugees in 2016 and has also been nominated for many other awards. The initative plans to include other museums and possibly other cities. The project will also be promoted at the Long Night of Museums in August, where museums such as the Pergamon will be open late into the evening.

Newcomers to Germany face a variety of challenges when searching for a job. Several refugees told InfoMigrants about their struggles finding employment in Germany. (27.05.2017)

Migrant, refugee, asylum seeker, and immigrant:  these varied terms have got even experts confused. Here is a list of terms used in Germany in the context of migration. (14.06.2017)