"InfoMigrants" is an online project offering information for refugees and migrants. Financed by the EU, the project is a cooperation between Deutsche Welle, France Médias Monde and Italian news agency ANSA. 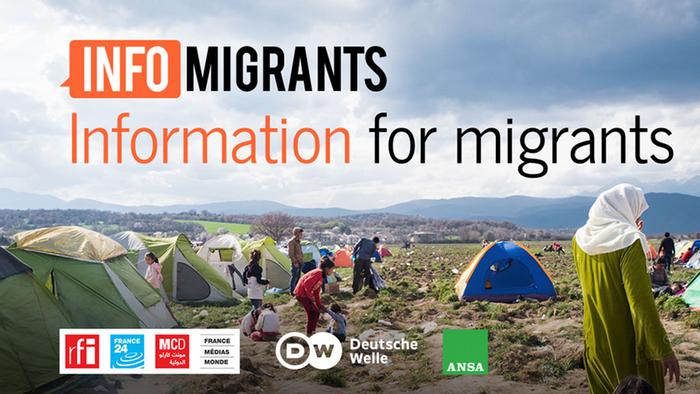 The offering is intended to reach people in Sub-Saharan Africa, the Middle East as well as Afghanistan and Pakistan, especially those who are considering fleeing to Europe. The project aims to explain the dangers of the journey and to offer realistic expectations of the European asylum process.

DW Director General Peter Limbourg, along with Marie-Christine Saragosse, the chairperson of France Médias Monde, and Giuseppe Cerbone, chairperson of ANSA, wrote in a joint statement: “Sadly the tragedy’s escalation proved us right a few months later when tens of thousands of migrants flocked to the shores of Lampedusa and Lesbos, on the Balkan routes. We were fully aware of the human tragedy that was unfolding and decided to combine our expertise and worldwide public-service mandates in order to provide migrant populations with trustworthy information. This cooperation among three leading European media to serve a European and worldwide cause was unprecedented and the European Commission promptly agreed to back us with funding.”

The three partners have established editorial teams to create a blog and a Facebook presence, which they have worked on since February. Available in three languages – English, Arabic and French – the offerings include daily news briefings as well as refugees’ reports of personal experiences, plus  educational pieces, for example about the EU-Turkey agreement. “InfoMigrants” also provides information about the program “Starthilfe Plus,” funded by the German government, which provides assistance for voluntary repatriation.

DW Director of Programming Gerda Meuer: “We want to provide refugees with independent information in order to unmask those false stories that are being put out by smugglers and people traffickers. In the future, migrants will also be able to send us their videos and photos. We would like to start a conversation with them via social media.”

The French-German-Italian cooperation has been approved for a year. Afterwards, the partners and the EU will determine whether the project should be continued. The project expands upon the offerings DW already has in place for newly arrived migrants, including the dossier “First steps in Germany,” language learning tools and a project for refugees from Afghanistan and Pakistan funded by the German foreign ministry.