The ousted Egyptian president and his sons have pleaded not guilty in the first session of their retrial on corruption charges. The Cairo Criminal Court trial of the three resumes on April 29. 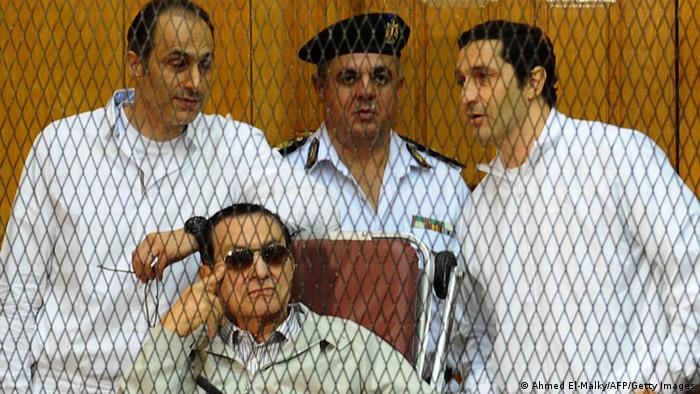 An Egyptian court began a retrial on Saturday of former President Hosni Mubarak and his sons on corruption charges.

The three men - who each pleaded innocent in the first session - are accused of diverting public funds to upgrade family properties.

When the judge at the Cairo Criminal Court asked them whether they had wasted public money, each of them answered with "No Sir. It didn't happen," local media said.

Mubarak and his sons, Alaa and Gamal, were charged with spending more than 100 million Egyptian pounds (12 million euros) of state money on their private residences.

According to the newspaper al-Masry al-Youm, a representative of the prosecution requested the court to hand down the toughest penalty to the three accused.

The Cairo Criminal Court said the trial would resume in April 29.

Mubarak, who is now 86, was sentenced to three years in prison last May and his two sons were given a four-year jail sentence in the same case.

However, in January, Egypt's high court overturned the conviction against Mubarak and his sons.

Mubarak, who was ousted in the 2011 uprising, is currently being treated in a military hospital in Cairo.

Thousands of people protested on Cairo's Tahrir Square on Saturday, following the acquittal of Hosni Mubarak, who had appealed a life-prison sentence for the killing of anti-regime protesters in 2011. (29.11.2014)

An Egyptian court has postponed its verdict in the murder retrial of former Egyptian president Hosni Mubarak, in the latest twist in the legal battle surrounding the ousted autocrat. (27.09.2014)