Move over electro, Berlin's got a new beat

Berlin features big on the global set list of electronica, but a bunch of musicians are strumming their stuff in an effort to add another, handmade, string to the city's bow. 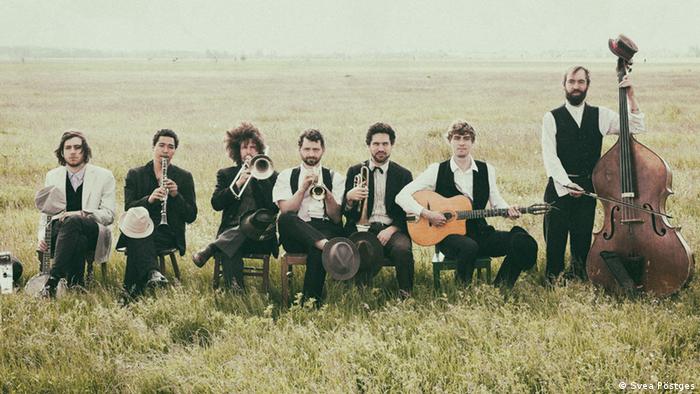 One chilly Friday night earlier this year, I was sitting in Schlesisch Blau mopping up the remains of the soup I'd ladled into my own bowl from the vast pots on the old-fashioned stove, when the chatter and chuckles that are the restaurant's ambient sound were suddenly interrupted by the deep pluck and jangly twang of an unexpected musical interlude.

Conversations hushed, and within moments the trio of musicians had the stage - or the square foot of standing room in front of the giant soup pots - and the attention of the assembled company. No preamble. Just music that sounded as if it had been tailor-made for that very situation. They played for 20 minutes or so, took their bows, sold a few CDs and went on their way.

As they were leaving I got talking to the double bass player, known variably as Flo, Flocko Motion, and Captain Flo, depending on the occasion and the band he is performing with. And he has plenty to choose from. He, and some 40 or so other musicians are part of a movement that is using history to create history. Musically speaking, that is.

The Syncopation Society is, as the name suggests, a group of groups that play with unexpected rhythmic variety.

"The drums kick in, acoustic guitars crash into double bass and polyphonic choruses with high-speed," is how one member, Diving for Sunken Treasure, describes its brand of syncopation. "As if Django Reinhardt jammed with The Clash in Morricone's pub somewhere in a parallel universe." Listening is believing.

There are 11 bands in the society, which collectively represent Rhythm and Blues, old Jazz, Swing, Klezma, Balkans, Jive and more, and their members hop from one to the other as required and desired.

"Some bands just exist for a moment," Flo told me. "They're like mayflies." And he seems to like it that way, not only because it creates space for an unending creative process, but because it nurtures the dying art of spontaneity. "Sometimes all you want to do is go out and busk," he says.

But as a regular with more than one band - including Skazka, Dizzy Birds and Susanna Berivan - he doesn't always have time to set up on the sidewalk. And the same goes for his fellow musicians. Often they play two gigs in one night, wearing two hats, and dipping into two musical worlds. 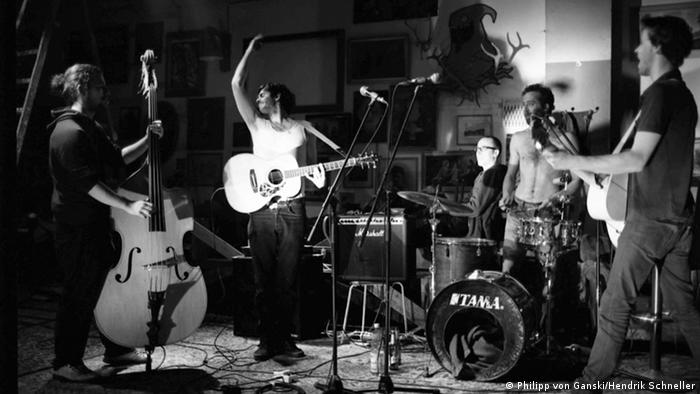 Diving for Sunken Treasure: "As if Django Reinhardt jammed with The Clash in Morricone's pub"

I recently went to watch the Dizzy Birds in action. To pass through the doors of the little Hepcats cafe in Kreuzberg that night was to enter a different world. A world infused with New Orleans of yesteryear. A world of flat caps and braces, of flippy dresses and modest heels.

The dancers knew what they were doing, their every move embracing the unamplified beat that filled the crowded room. I have no doubt they would have gone on all night if Flo and his fellow musicians had not put down their instruments.

But by 10pm they were wrapping it up and going their separate ways. I peeled off too, and headed to Badehaus Szimpla to watch Berlin institution Skazka Orchesra, an ensemble that claims to "combine Russian folk, klezma, ska, Balkan music, Latin American rhythms and even jazz to create a single sound." When I arrived, they were getting ready to play - Flo among them. 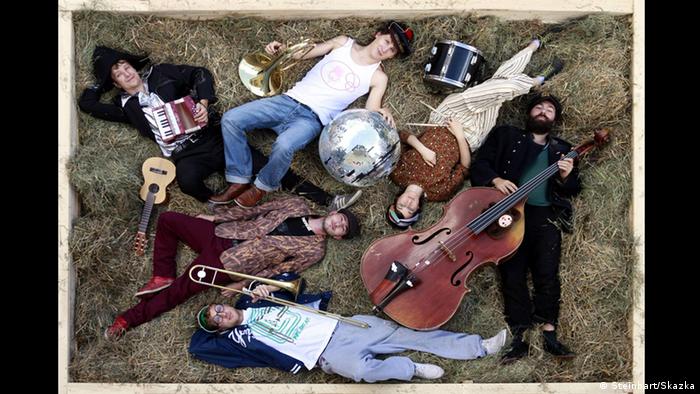 Skazka Orchestra have become something of a Berlin institution

From the opening bars of the first, to the closing of the last, the audience was rapt. They didn't dance like the Swing aficionados in Hepcats, but they sure did dance, which is in keeping with the Sycnopation Society's stated aim of creating "handmade, artistic, enjoyable and danceable music."

And so there it is, Berlin might have Berghain, Tresor and its ilk, and at the absolute opposite end of the scale, it might even have four opera houses. But there besides, it plays host to an amazing array of emerging bands that are redrawing the city's musical map. By hand.

Scene in Berlin: The Insider

Get inside Berlin. In a monthly series, DW presents the up-close look at what makes this city rock. Guest columnist Jan Kage is a nightowl who has shaped Berlin's art and music scenes for a decade and a half. (05.05.2014)

Berlin has its sights on Eurovision 2015

When Lena won the Eurovision Song Contest in 2010, Germans could no long deny that miracles do exist. Berliners are putting on fake eyelashes and turning on their wind machines to make sure karma keeps them in mind. (08.05.2014)

Berlin is known as a hotspot for edgy creativity - from contemporary art to street art and sound art. Now scent art is making a splash in the German capital, from the gallery to the cinema. (06.05.2014)