Mother Teresa declared a saint by Pope Francis | World| Breaking news and perspectives from around the globe | DW | 04.09.2016

Mother Teresa founded a holy order and was a Nobel Peace Prize recipient. Many people already saw her as a saint during her lifetime. However, others are deeply critical of the nun and the way she carried out her work. 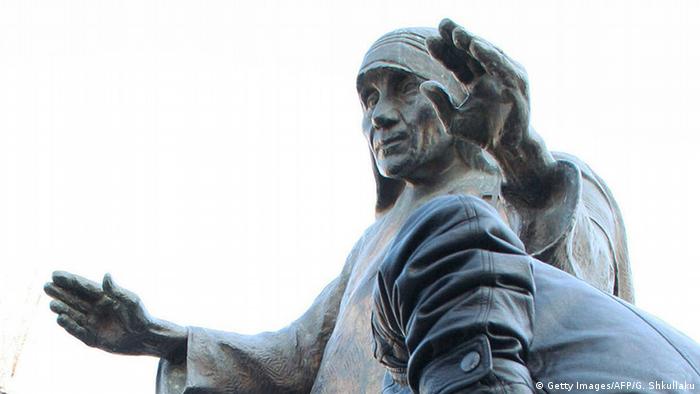 These days the Vatican only requires one or two miracles to declare one a saint. Nonetheless, the Catholic Church still finds it difficult to confirm events that cannot, firstly, be explained by scientific means, and, secondly, occurred in response to prayers offered up to a person who has died. In the case of Mother Teresa, however, the Church seems convinced that the nun, who devoted her life to the poorest of the poor, is indeed capable of performing miracles.

She was beatified by Pope John Paul II in 2003, just six years after her death. This was based on the case of an Indian woman who claimed to have been cured of a tumor after praying to Mother Teresa and wearing an amulet blessed by her. Some doctors had doubts, but the Vatican approved it as a miracle. 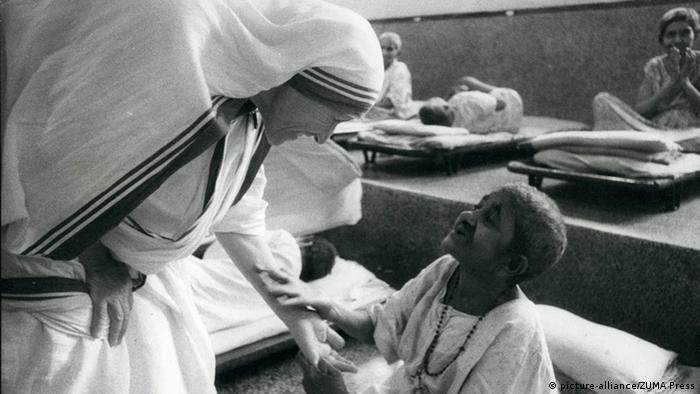 She devoted her life to God and the poor

In December 2015, Pope Francis then accepted a recommendation by the congregation responsible for matters of sainthood and ascribed to Mother Teresa the second miracle required for canonization. This was the medically unexplained healing of a Brazilian man who had been suffering from a malignant brain tumor. His relatives were said to have prayed to Mother Teresa for help.

Pope Francis declared Mother Teresa a saint in a ceremony at the Vatican on Sunday.

Nuns in the garments of the poor

Mother Teresa was born Anjeze Gonxhe Bojaxhiu on 26 August 1910 in Skopje, then part of the Ottoman Empire. The child of a prosperous Albanian family, she was brought up a strict Catholic. At the age of 17, Anjeze Gonxhe left her homeland to join the Sisters of Loreto in Ireland. Shortly afterwards she traveled to India for the first time and entered her novitiate in the Loreto convent there.

She was "called by God" in September 1946, on a long train ride to Calcutta. Her mission, she was told, was to help and care for the poorest of the poor. She was convinced that Jesus was in every poor person, and two years later, with the permission of Pope Pius XII, she left the convent to found a new sisterhood. She started wearing a white sari with three blue stripes - the garment worn by the poor in Bengal. Her order, the Missionaries of Charity, was recognized by the Vatican two years later. 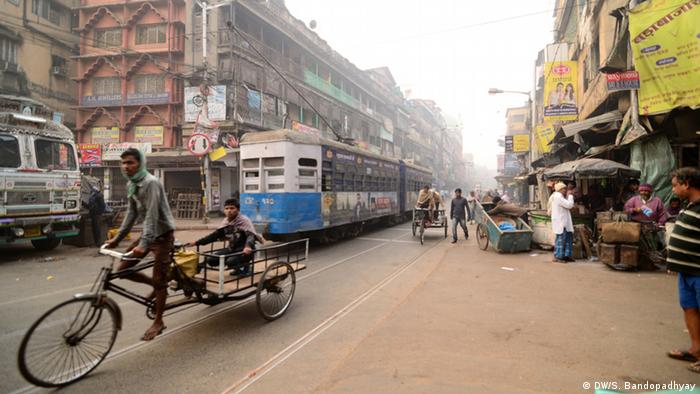 Mother Teresa carried out her work in the city of Calcutta

Mother Teresa founded a hospice where volunteers, nuns and monks cared for the dying. This Home for the Dying, which she named "Kalighat," or "Nirmal Hriday" (Home of the Pure Heart), was situated next to the Temple of Kali in Calcutta. Kali is the goddess most revered and feared by Hindus. She possesses the power of both giving and destroying life. Since the foundation of the hospice, more than 45,000 people have spent their final days there. "Death is the highest development of human life, because when a person dies at peace with God he has achieved the highest development," Mother Teresa said.

A drop in the ocean?

Generous donations soon poured in from Western countries to support her work with the poor and needy. But the nun never saw herself as a social worker. She always insisted that she was only acting as her religion taught her to do, specifically: according to the wishes of Jesus Christ. "The work is not the vocation; it is prayer," she said.

After Kalighat, Mother Teresa founded more homes for the needy. In Calcutta, where millions live in slums and more than 500,000 sleep on the street, this help was just a drop in the ocean. But Mother Teresa continued to work tirelessly for the poorest of the poor. In 1979 she was awarded the Nobel Peace Prize. 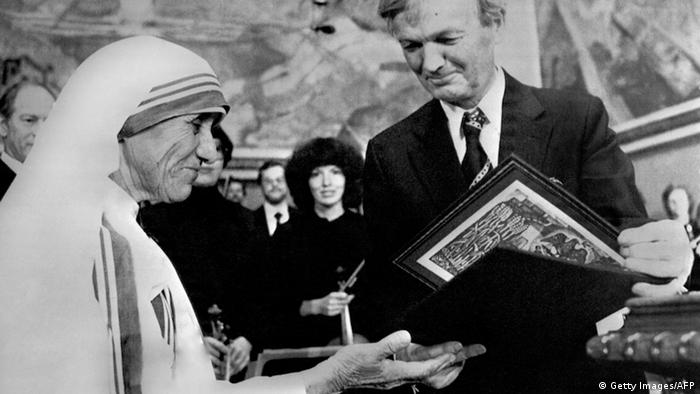 However, she was the object of criticism as well as praise. People held it against her that she met with dictators such as the Haitian president Francois "Papa Doc" Duvalier. Furthermore, her administration of and accounting for donations has been described as, at best, careless. She was also criticized for refusing to give suffering people medicine that would relieve their pain. In a study of her life's work in a French science magazine, Mother Teresa was quoted as saying, "There is something quite wonderful about seeing how they bear their fate. They suffer with it, like Jesus on the cross, and so come closer to him." The British-American writer Christopher Hitchens went so far as to describe her as "Hell's Angel."

Mother Teresa herself paid little attention to her critics. Religion was her life. "Every person suffers in this world," she said. "Precisely this suffering should, in the right soul, be used, so that it is transformed into love of Jesus Christ. Especially today, when so much sin is prevalent."

In 1997, Mother Teresa died at the age of 87. To this day Albania and Macedonia continue to dispute whether she should be considered Albanian or Macedonian. Both countries have erected monuments to her.

Today, her order comprises more than 5,000 nuns, and there are around 600 homes of the Missionaries of Charity in 130 countries.

This is entirely as Mother Teresa would have wished it. "Unfortunately, there is too much poverty of the soul, especially in Western countries," she said. "I ask everyone to bring prayer back into families. Pray together that we should love each other as God loves us."

Alois Gumbar is one of the last living relatives of Mother Teresa. After years of waiting, he will attend the canonization ceremony of his aunt on September 4. Katerina Blazevska visited him in Skopje. (02.09.2016)

For people in Kolkata, Mother Teresa is already a 'saint'

For many in India's Kolkata city, Mother Teresa had already acquired sainthood during her lifetime. For them, the forthcoming declaration of her sainthood by Pope Francis on Sunday is merely a matter of formality. (01.09.2016)