In a new survey, 55 percent of respondents said they don't want mobile phones in use on planes. The IT industry trade group study also revealed that younger Germans tended to be more accepting of mobile tech in the sky. 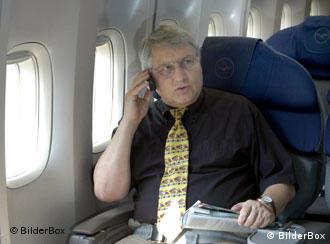 On Sunday, Bitkom, a German IT industry group, published the results of a survey, revealing that 55 percent of Germans don't want people to make calls on their mobiles while on airplanes.

The survey also found that only 19 percent of respondents were in favor of unrestricted use of mobile phones.

"Most people want to have their rest [while] in the sky," said August-Wilhelm Scheer, the president of Bitkom, in a statement.

The results of the survey come two months after Lufthansa reintroduced on-board Internet access for trans-Atlantic flights, which costs 11 euros ($15) for one hour, or 20 euros for 24 hours.

The German airline giant will not block VOIP services like Skype, but the company has said that their use will not be permitted.

Lufthansa has also said that by the spring of 2011, it will also make mobile phone technology available for text messaging and wireless data transfer via smart phones. 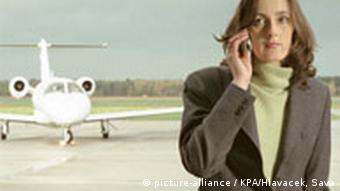 If the majority of Germans have their way, calls will still have to be made outside of the aircraft

Younger Germans tend to be more in favor

This survey is markedly similar to one conducted three years ago, where 60 percent of those surveyed said that they were against the use of mobile phones while aboard a plane.

However, 15 percent of respondents said that that they would not object to people talking on their phone, provided it was in a separate area of the plane.

The Bitkom survey tends to bear out the notion that some people may relish the chance to be totally disconnected from the rest of the world for a few hours.

“In business travel, some people enjoy that they aren't available for a while," said Eric Heymann, a Deutsche Bank Research analyst, in an interview with Deutsche Welle in December 2010. "It's sort of the last mobile-phone-free zone."

Lufthansa's new CEO Christoph Franz has said his company will hire some 4,000 new employees in 2011, as Germany's largest air carrier takes off on a course of projected growth. (02.01.2011)

Lufthansa's transatlantic passengers with laptops and smartphones can now surf the Internet in midair. Voice chats aren't permitted, but there's no telling what sites passengers might visit. (03.12.2010)

In a series of tests, German scientists take on how flavor profiles change while in-flight. So far, Lufthansa has decided to make their bread rolls a little more salty. (15.10.2010)