Moroccan state TV has admitted that a segment which showed women how to hide bruises with makeup was "completely inappropriate." Hundreds of women have signed a petition expressing their outrage. 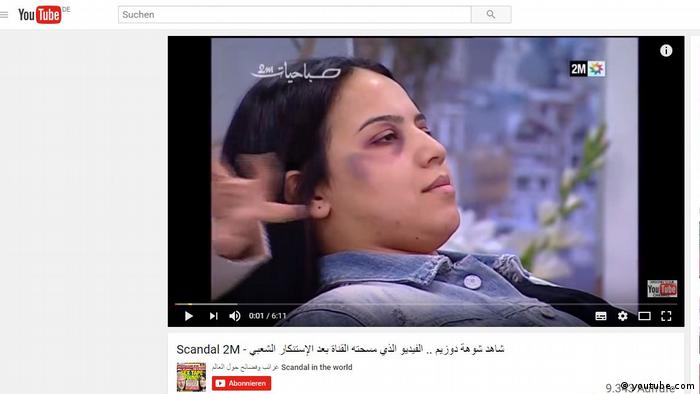 Morocco's national television service 2M admitted Sunday that a makeup tip segment recommending that women should camouflage traces of domestic violence had been broadcast "in total contradiction with the editorial line of the channel."

In a statement, 2M offered its "most sincere apologies for this misjudgment" and promised to take action against those responsible for the broadcast.

Two Moroccan teens have been charged with homosexual acts and face up to three years in prison if found guilty. Human Rights Watch has decried the charges, which they say is the first such case involving two girls. (25.11.2016)

Domestic violence: 'I don't want to be a victim'

A camera team interviewing Katja Schneidt once remarked that she didn't look sad enough to be a victim. She now sees speaking up about domestic violence in Germany as a struggle against the perpetrators - and clichés. (25.11.2016)

Police in Rio de Janeiro have arrested a Moroccan boxer for allegedly sexually assaulting two Brazilian women in the Olympic Village. Police say he'll remain in custody for 15 days while an investigation is carried out. (05.08.2016)

The advice was aired on November 23, two days before the United Nations International Day for the Elimination of Violence Against Women.

Face made up to look swollen

During the segment, which was later posted to social media, a makeup artist demonstrated beauty tips on a woman whose face had been made up to look as though it was bruised.

The presenter of the show reminded viewers that the woman's appearance had not been caused by "real wounds," before going on to name several beauty brands of heavy foundations and concealers.

Initially the broadcast went unnoticed. But when a clip of the show was posted online the next day, several viewers took to social media to express their outrage.

Within hours, hundreds of women had signed a petition demanding an apology from the TV channel.

The petition said: "As Moroccan women and as feminist activists in Morocco, and in the name of all Moroccan people, we denounce the message of normalization with violence against women. We demand severe sanctions against this show, "Sabahiyat", and the channel 2M."

"2M decided to celebrate the International Day for the Elimination of Violence Against Women with anti-violence makeup," said one Twitter user by the name of @mahamiou.

In its apology that followed the furor, 2M defended its commitment to women's rights, adding that its broadcast charter sought to enhance the image of women in Morocco.

But when the apology was posted to Facebook, hundreds more viewers continued to lambast the segment, describing it as "despicable," "unprofessional" and "shameful."

The video has since been removed from the station's website and social media feeds.

Morocco continues to have a serious problem with domestic violence. A national survey by the Moroccan High Commission of Planning found that in 2009 nearly 63 percent of women had experienced physical, sexual, psychological or economic violence.

Many women fail to report domestic violence, complaining that the issue is not taken seriously by police.

In February, Human Rights Watch wrote a letter to the Moroccan government calling for reforms of laws on domestic violence. The proposals in the letter were based on information gleaned from an investigation into the issue in Morocco, during which the group interviewed women and girls who had suffered from domestic abuse, as well as lawyers and women's rights activists.

United Nations agencies and other human rights organizations have also put pressure on Morocco to improve legal protections for women.