Additional police are being sent to Bautzen ahead of anti-migrant demonstrations planned in the eastern German town this weekend. Authorities are hoping to prevent a repeat of violent clashes between locals and refugees. 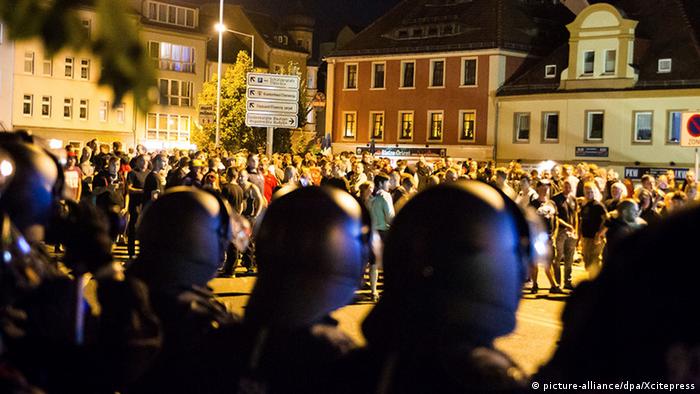 Bautzen police chief Uwe Kilz said the security presence would be noticeably increased in the small Saxon town, which is bracing for upcoming right-wing rallies on Sunday.

"The ugly scenes we saw in the square the previous evening weren't there this time," Kilz said, although police registered eight offenses for assault, the use of anti-constitutional symbols and a seditious chant.

One night earlier, about 100 police were called to the square to break up fighting between far-right Germans and asylum seekers. During Wednesday's riots, officers had to form chains around the two groups to keep them apart. They also found themselves on the receiving end of violence, and used pepper spray and clubs after migrants threw bottles and other objects at them.

After the clashes died down, local extremists reportedly followed the migrants back to their shelter, forcing police to guard the property overnight.

The federal government condemned the clashes, with a spokeswoman warning on Friday that xenophobic and violent riots were "not worthy of our country."

Bautzen Mayor Alexander Ahrens, meanwhile, raised concerns that hostility in the town had escalated to a new level.

On Friday, Ahrens said he was open to having a dialogue with the radical right-wing groups. "I am always open to an objective discussion," he told the German dpa news agency. "I don't interpret their current discourse as outright conditions."

Right-wing factions in Bautzen said that would give the town's administration the chance to pursue action. A memo published by a collective of radical groups said: "We expect circumstances to improve considerably in our town. We will assess these improvements and decide on a weekly basis whether to mobilize, or whether the changes are noticeable."

Ahrens said he would gladly discuss any failures and abuses during the violence, provided the groups recognize and these issues do not just apply to the administration, but to themselves as well. 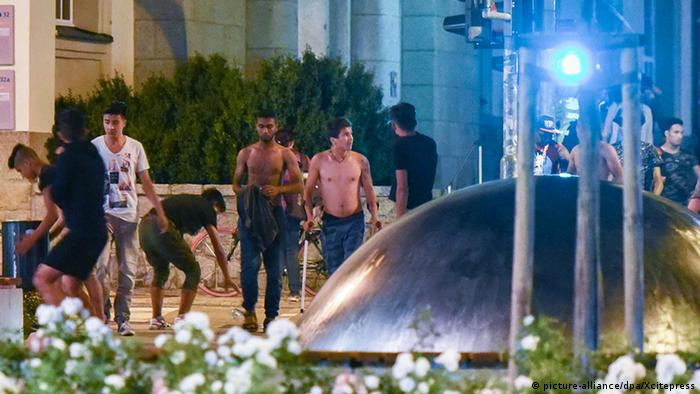 Saxony's integration minister, Petra Köpping, acknowledged that eastern Germany was more prone to anti-migrant sentiment than other parts of the country, but stressed that Wednesday's violence was not representative of Bautzen.

"I don't know that I can talk about a pogrom atmosphere, but it's a scary atmosphere, and that worries me," she told public broadcaster ARD, adding that there was clearly work to be done to speed up the integration of newcomers in the community.

Bautzen, located close to the Czech border, has made headlines several times in recent months over clashes between asylum-seekers and radical protesters.

In February, onlookers celebrated as fire damaged a former hotel that was being turned into a refugee home in the town. One month later, members of the public verbally abused German President Joachim Gauck during a visit to address locals about the migrant crisis.

In an interview with public broadcaster Deutschlandfunk on Friday, Saxony's head of the state police union, Hagen Husgen, expressed concerns about the number of police officers on site.

"We have cut more than 2,000 police jobs in recent years," Husgen said. "I think that if we had had more police officers on duty on Wednesday, then we could have prevented the worst. Now we have to wait for our colleagues to assess the repercussions."

Budget cuts to policing contributed to the escalating violence and attacks on officers, he said.

A small town in the state of Saxony has reported violence between residents and migrants. The town has repeatedly been the scene of such confrontations in recent months. (15.09.2016)

"We don't have enough officers"

Saxony's state head of the police union discusses the Bautzen clashes on Deutschlandfunk.

The situation is escalating for thousands of people stranded at the border of Belarus and Poland. The EU imposes new sanctions, while Belarus is threatening to cut off the bloc's gas supply. What is Germany's position?

During her last official visit to Poland, the German chancellor decried Belarus for conducting "hybrid attacks" against its EU neighbors.