More people are leaving Germany than arriving | Germany| News and in-depth reporting from Berlin and beyond | DW | 23.07.2009

The German Federal Statistical Office has issued figures showing that, for the first time since German reunification, there were more emigrants from Germany last year than there were immigrants. 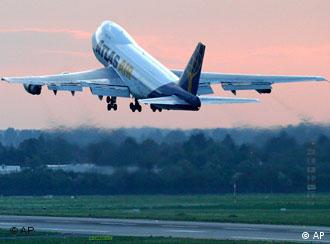 More people are taking off than landing in Germany

Most of the immigrants came from EU countries, with 119,000 Poles forming by far the largest group. Only Turkey, with 26,200 immigrants, remains a substantial source of immigration from outside the EU.

Big cities were their preferred destinations, with Berlin and Hamburg taking a disproportionately large number.

Meanwhile, the numbers of Germans and foreigners leaving the country continues to rise; altogether 56,000 more people left than arrived. The Statistical Office in Wiesbaden admits that its figures for departures are not perfect this year, because of administrative changes in local registration offices which have led to some people being taken off the registers who should not have been on them in the first place.

But it says that it's quite clear that, while the number of foreigners arriving is still greater than the number of those leaving (+11,000), the sum for German movements is seriously negative (-66,000).

The Office summarizes: "The emigration of the Germans continues."

A persistent fall in the number of immigrants becoming naturalized German citizens has seen politicians in Berlin reignite the debate about cultural integration and citizenship tests. (04.05.2009)

Immigration into Germany in the year 2003, for the first time in many decades, dropped below 800,000 as the influx of foreigners throughout the 1990s has receded, according to government statistics released on Monday. (18.01.2005)