German citizenship applications continue to fall | Germany| News and in-depth reporting from Berlin and beyond | DW | 04.05.2009

A persistent fall in the number of immigrants becoming naturalized German citizens has seen politicians in Berlin reignite the debate about cultural integration and citizenship tests. 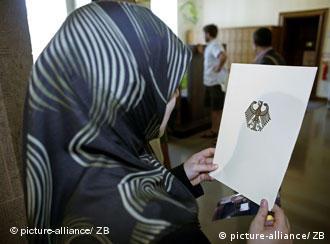 The number of immigrants becoming naturalized Germans has fallen steadily over the past decade.

Official figures for 2008 haven't yet been published, but Sevim Dagdelen, a parliamentarian from Germany's Left party, has done her own research and calculations. She estimates the number of immigrants who chose to become German citizens last year fell by another 18 percent last year.

"The federal government keeps talking about Germany as a land of integration, with a welcoming culture of naturalization," Dagdelen told Deutsche Welle. "But it's clearly untrue. Many foreigners aren't even applying for German citizenship because they're worried they won't be accepted, because the hurdles are set too high." 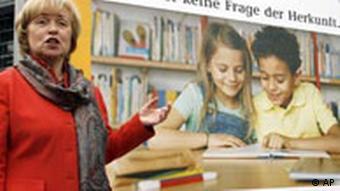 To be granted German citizenship, an immigrant must have lived in Germany legally for at least eight years. They have to prove they have an independent income, don't require social welfare or unemployment benefits, and have a good grasp of the German language.

Additional rules introduced in 2007 require applicants who have not graduated from a German school to pass a controversial "citizenship test".

The examination costs 25 euros and consists of 33 multiple choice items selected from a catalog of 310 questions about German history, culture and the political system. Would-be Germans must provide at least 17 correct answers to pass, otherwise they can try again and re-sit the examination at a later date.

The federal government says extremely low failure rates (around one percent) prove the test is a success. But critics say the authorities have got it wrong.

The left-wing Berlin state senate's commissioner for integration, Guenter Piening, says many immigrants from educationally disadvantaged backgrounds are so worried by the test that they haven't dared to apply for German citizenship.

"These are the people we really want to include in our society," Piening told Deutsche Welle. "The middle-class, educated immigrants who confidently decide they want to become German aren't a problem. The people we really want to appeal to are the immigrants who've until now have been unsure about naturalization, but do want to commit to our society. And it's precisely these people who are being put off by mixed signals."

The government's new language test is particularly unpopular among immigrants. Applicants can't get by on basic phrases communicating where they live and who they know. They have to be able to describe their dreams and justify their opinions.

"We should make exceptions for older, first-generation immigrants," Piening said, adding that the current testing regime is especially challenging for people who never attended a German school. 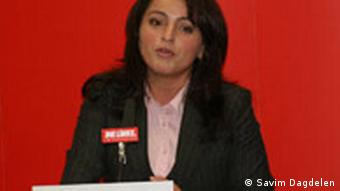 Sevim Dagdelen says citizenship tests are an obstacle to integration

The federal government's commissioner for integration, Maria Boehmer, however, is opposed to lowering standards even in the face of falling naturalization numbers.

"In Hamburg I took part in a podium discussion. There was an immigrant who'd spent more than 30 years in Germany. He told me that without a good grasp of the German language, he would still be little more than a spectator on the edge of society;" she told Deutsche Welle.

Boehmer, a Christian Democrat, says the plunge in the number of foreigners taking up German citizenship needs to be carefully examined because a number of factors are at play.

One is a rule that came into force in 2000. It states that a child born to an immigrant parent who's been living in Germany for more than eight years is automatically granted German citizenship - so there's no need for an application.

However, critics point out that such children only remain German if they choose to give up their foreign nationality when they reach 18 years of age. They say this forced decision puts youths with immigrant backgrounds under a lot of pressure.

So far calls for Germany to lift its general ban on dual citizenship have found little support among Germany's major political parties - and there's little to suggest their position will change any time soon.

German Chancellor Angela Merkel has announced a youth summit on integration. She wants to discuss language education at public schools, employment possibilities and education for foreigners. (04.05.2008)

Illiterate foreigners are not eligible for German citizenship, according to a German court ruling disclosed Thursday. (27.02.2009)