More G8 Protests in Rostock Turn Violent, Lead to Arrests | Germany | News and in-depth reporting from Berlin and beyond | DW | 04.06.2007

Just two days after a mass anti-G8 demonstration in Rostock on Saturday turned violent, protestors skirmished with police again, this time in a part of town known for neo-Nazi attacks in the early 1990s. 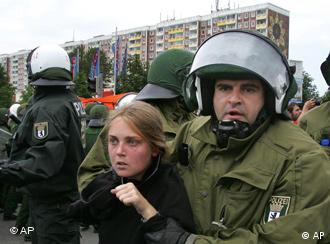 Protestors visited the Sunflower House for asylum-seekers, which was burned in 1992

Nearly 1,000 people staged a sit-down protest Monday morning in front of the immigration office in Baltic Sea port city of Rostock to protest the asylum policies of the world's major industrialized countries.

The rally started peacefully, but turned violent when some protestors began throwing bottles at police officers, said a police spokesperson. A photo journalist was injured.

Between 200 and 300 of the demonstrators Monday were radicals, many of them in black clothing and masks, a uniform which identifies them among friends and hides their faces from their police foes. Four demonstrators were detained there for violating a police ban on wearing masks at rallies. 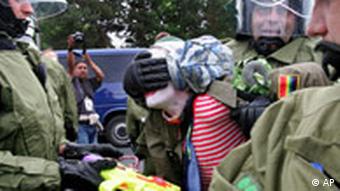 Police detain a clown armed with a water pistol

As a sign of tribute, the demonstrators passed by a home for refugees in the Rostock-Lichtenhagen where neo-Nazis had terrorized Vietnamese asylum-seekers in 1992.

In an event that horrified many, the so-called "Sunflower House" was set on fire as neighbors stood watching.

On Monday, Protestors appealed for global freedom of migration and a loosening of asylum and immigration laws in industrialized countries to open doors to migrants from developing countries. Part of the anti-G8 movement regards immigration laws as racist and oppressive because rules prevent poor people from moving to Germany to live.

Monday's incident was the second outbreak of violence in Rostock in the run-up to the Group of Eight summit, which begins Wednesday in nearby Heiligendamm.

At demonstrations on Saturday, nearly 1,000 people were injured, including 433 police officers.

As the dust settles in Rostock after Saturday's violent demonstrations, politicians and globalization critics alike are critical of both the militant demonstrators and the police's strategy. (04.06.2007)

Police and protest organizers Sunday laid the blame for the riot that erupted during an anti-G8 rally in the German port of Rostock on groups bent on violence that had infiltrated the largely peaceful demonstors. (03.06.2007)

In a decision that cannot be appealed, an administrative court ruled that protesters will not be allowed to demonstrate within a six-kilometer zone around world leaders meeting next week at the G8 summit in Heiligendamm. (01.06.2007)

France has repatriated more than half the people it defined as radical Islamists living in the country without a residence permit since 2018. Now it wants to extend the penalty and deport even more.