Police and protest organizers Sunday laid the blame for the riot that erupted during an anti-G8 rally in the German port of Rostock on groups bent on violence that had infiltrated the largely peaceful demonstors. 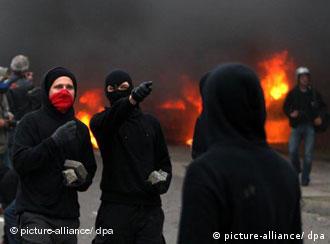 The ugly face of largely peaceful demonstrations in Rostock

Police spokesman Axel Falkenberg put the number of arrests at 125, adding that many of the violent elements had come from outside Germany. Most of those arrested were released after calm had returned to the city.

Among the arrested were protestors from Austria, Bulgaria, France, Japan, Russia, Spain and Sweden, he said. 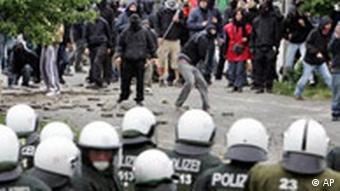 Police said 433 officers had been injured, 30 of them seriously, in the clashes that broke out as the demonstrators passed along two routes through the historic Hanseatic port.

The organizers said 520 demonstrators had been injured. Silke Studzinsky of the local emergency services said 20 had been seriously hurt.

The organizers said at least 165 people had been arrested and that lawyers had been hindered in their attempts to assist them. 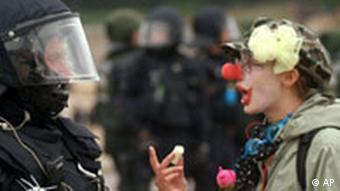 Not all encounters were unpleasant

The organizers blamed a small group of activists that attacked a police vehicle mid-afternoon on Saturday for deliberately sparking the violence.

Manfred Stenner of the Action Alliance said police had maintained a "de-escalatory stance."

But Monty Schaedel, spokesman for the Rostock Action Alliance, called the police response "clumsy and unprofessional."

Police attributed the violence to 2,000 organized elements. They put the total attendance at the rally at up to 30,000, while the organizers said more than twice that number had participated.

The protest was aimed at the G8 summit scheduled to begin Wednesday at the resort of Heiligendamm some 25 kilometers (15.5 miles) away. 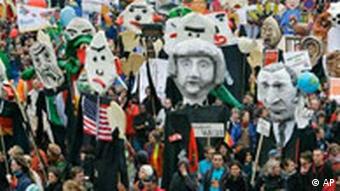 Lorenz Caffier, interior minister for the state of Mecklenburg-Western Pomerania, condemned the violence.

"The image of thousands of peaceful demonstrations was destroyed by 2,000 vicious thugs from the violent political subculture," he said.

Rostock was hosting another political protest linked to the G8 Sunday, with a rally against gene technology and a march to a local gene research institute.

As tens of thousands of peaceful anti-globalization demonstrators marched in protest against the upcoming G8 summit in the German town of Rostock Saturday, some clashed violently with police, injuring at least 100. (02.06.2007)

Germany Seals Off Sea-Side Town Ahead of G8 Summit

German security forces sealed off the Baltic seaside town of Heiligendamm early Wednesday ahead of next week's G8 summit. It's just one of a series of tight, yet controversial security measures. (30.05.2007)

Police used water canons and arrested left-wing demonstrators on the sidelines of an EU-Asia meeting of foreign ministers in Hamburg on Monday. (29.05.2007)