Borussia Dortmund fell to their 11th defeat of the season, at home to Augsburg on Wednesday. While Jürgen Klopp's men continue to toil in the Bundesliga, Hamburg and Bremen continued their return to form. 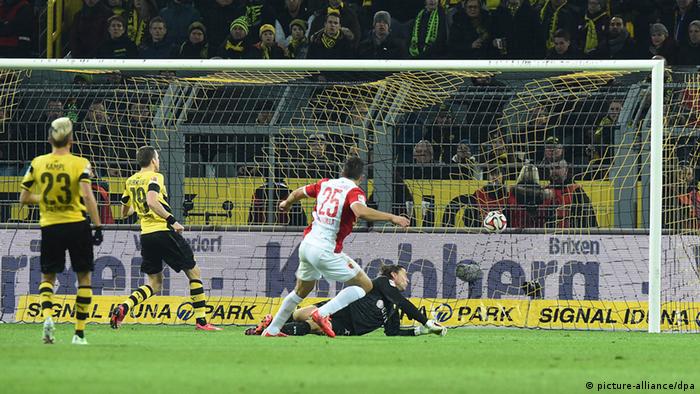 Borussia Dortmund's fourth home defeat of the season on Wednesday night in the Bundesliga leaves them rock bottom and facing the realization of being locked in a battle for survival.

A solid away performance from Augsburg, in which they scored with their only real chance of the game through Raul Bobadilla, leaves Dortmund two points behind Hertha Berlin, Stuttgart and Freiburg at the bottom.

Dortmund started on the front-foot and had a goal ruled out after 25 minutes. Ciro Immobile's shot was heading away from goal, but the touch from Pierre-Emerick Aubameyang, in an offside position, diverted the ball past Augsburg goalkeeper Alex Manninger. 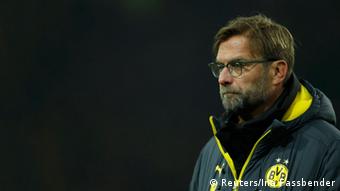 Freiburg, Mainz and Stuttgart are Dortmund's next opponents

Kevin Kampl and Aubameyang both had further efforts on goal, as well as Augsburg captain Paul Verhaegh, who should have done better when laid off in the box by ex-Dortmund attacker Ji Dong-Won.

The home side's worst nightmares heading into this midweek encounter became real five minutes into the second half though. A run from Halil Altintop, which should have been stopped long before he reached the box, ended with a half-hearted Marcel Schmelzer clearance falling kindly to Argentine Bobadilla to smash home.

As Dortmund looked tired, afraid and unwilling to take the game for their own, they were handed a boost when Christian Jancker was sent off after fouling Aubameyang and denying the Gabon international a clear goal-scoring opportunity.

Henrikh Mkhitaryan, who came on for Marco Reus, should have scored at the back post before Immobile passed up a near-identical chance. The Italian's free-header from three yards out was aimed straight at Manninger.

Dortmund weren't able to take advantage of Augsburg's numerical disadvantage, with the away side taking all three points to sit joint-third with Borussia Mönchengladbach.

Gaining ground at the bottom 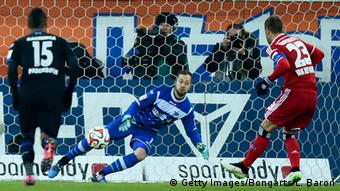 Van der Vaart scored his fourth of this season

Meanwhile, Hamburg defeated Paderborn in the battle to avoid relegation with the former managing their first away win of the season.

Before the match in Dortmund had even begun, Hamburg had already taken the lead through Rafael van der Vaart's fourth goal of the season from the spot. Marcell Jansen, moving up to left-midfield, was knocked over by Ziegler after just four seconds.

Joe Zinnbauer's men kept Paderborn, the favorites to go down to the Bundesliga second division, at bay for long spells in the game without being committed to attacking football.

Jansen sealed the three points, turning quickly before slamming past Lukas Kruse late in the game, and then Zoltan Stieber added some shine for a third goal in stoppage time. 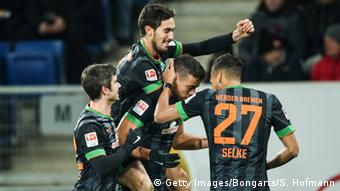 Bargfrede bagged another win in an impressive run for Bremen

Since the former youth coach was appointed, Bremen have picked up 19 points from 10 matches and would be fifth in the league, if you counted just the period he has been in charge.

Franco di Santo scored after eight minutes – his 8th league strike of the season – before Ermin Bicakcic leveled. Philipp Bargfrede netted after the break to secure a fine away win for the River Islanders.

The Berliners are gradually being sucked into the relegation battle, which has consumed almost half of the league in recent weeks.

Elsewhere on Wednesday, Cologne and Stuttgart shared a point in another relegation six-pointer with the Billy Goats up against Paderborn at the weekend, whilst Stuttgart face Bayern Munich on home turf.