The 2017 Ibrahim Index of African Governance was released on Monday. Philanthropist Mo Ibrahim spoke to DW about Africa's demographic dilemma, the Zimbabwe coup, and Ghana as a model of democracy. 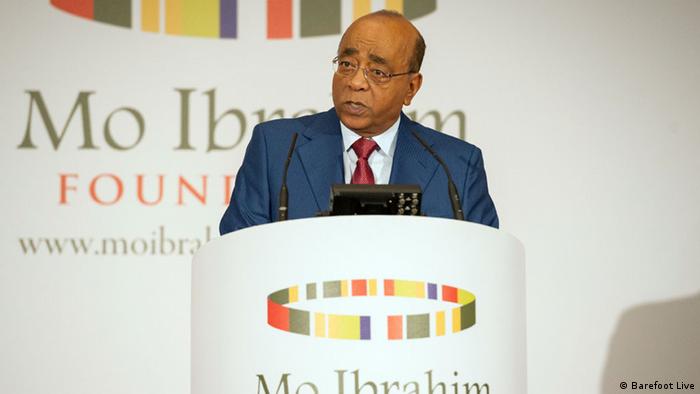 DW: Your overall report on governance in Africa paints a rather bleak picture for the future, why is that?

Mo Ibrahim: It’s not bleak because we tried to give a realistic picture and any realistic picture will have blemishes and also have some beauty spots. I’ve tried to raise some flags here. [Good] governance improved in general, so that’s positive. The rural sector has not deteriorated, but we don’t see progress there. So that is something. The one area where we think is actually critical is the young people — as you know because of the demographics of Africa we have a large population of young people. We need to find jobs for those people; we need to improve education and training, education for employment. And this area we're not happy with.

Why is it that African governments failed to address this problem while they know that 77 percent of the African population is under the age of 35?

Exactly. It is a question of really addressing the problem effectively. I think more resources need to go to the education sector which itself really needs a complete review. What we teach our kids in schools for example — is extremely old fashioned. Much of it is relics of the colonial days that needs revision. The economies are changing and what jobs are needed today is different from what [were] needed 30, 40 years ago. Thirty or forty years ago we needed people who write well etc., we needed clocks.  It’s different now.  Now we need people who are IT savvy, people who can really deal with numbers, technologies, and communications. The way we teach and prepare our kids is really important. I always start with a very simple example. You know that two percent of our university graduates study agriculture and 27 percent do humanities. We see a great imbalance here. How are we going to build the country with two percent of young people taught about agriculture while 27 percent study humanities? It is also important for the education authorities to really communicate and sit down with the business communities to really understand what the needs for the new economies are. What jobs are needed in the future? What kind of skills do we need to arm our young people with? Because if we don't do that, this bulge in demographics, as you mentioned, is a two-edged sword. If you succeed in preparing those youngsters to be useful, to get jobs, and to contribute in economic and social life of the country, that's a great advantage for Africa. But if we fail to do that we'll end up with a huge unemployment issue across Africa. And what are those young people going to do? If you have no job, if you have no hope — what are you going to do? You're going to end up buying in the Mediterranean, you pick up arms and you join  Al-Shabaab or Boko Haram. There's a real danger there.

How much of a setback do you and your foundation face when you see the developments like what is happening now in Zimbabwe with the military taking over power?

I have to be very careful here. To start with - I don’t think the military should take over power anywhere. I don't understand why people sometimes cheer if the military takes over, even from an unpopular or a bad president, because that is not the solution. We don't know who those guys are, or what their agenda is. And it's quite possible that we can end up with a worse regime actually. I don't celebrate military coup. We don't need to rush now. We need to wait and see what is going to happen [in Zimbabwe] and what the Southern African Development Community [SADC] is going to come up with.

In a country like Ghana, which has been an example in Africa as a beacon of democracy in recent times has slumped down in terms of democratic practices - to some extent - and other countries surprisingly have moved up. How do you explain these discrepancies and what led to Ghana's falling back?

Right. I think in the case of Ghana, which remains as one of the really good democracies in Africa, the peaceful transfer of power has been remarkable, frankly. Maybe not in the last election — the vote difference was quite big — but in the previous election there was an extremely narrow difference in the voting. We didn't see violence. And that was something we're proud of. I really think democracy in Ghana is safe and Ghana remains a beacon. There have been some issues about the economic side — the amount of debt has increased and limited the government ability to do something. Sometimes the discovery of natural resources in the country can cause a problem actually, because people start spending the money before they get it. [And when that happens] there's suddenly, oops! We have a big hole in the budget and we just need to call now for the International Monetary Fund [IMF]. I think there's a blip there. But I trust the Ghanaians will be able to overcome that and I will always be proud of Ghana.

In terms of your Mo Ibrahim prize some critics have argued that the standards are too high, that the crop of leaders we have right now in Africa are unlikely to ever attain those standards to win the Mo Ibrahim Prize. What do you have to say to that?

I say two things. First we managed to offer the prize five times in the last 10 years. That is not bad. If we tried to do this prize in Europe in the past 10 years, could you have found five European leaders who deserve the prize? I doubt it. Would you have picked up, I don't know, Berlusconi? Look around in Europe at the state of leadership we have. Maybe one, maybe two? How many can we get in the last ten years? So excellence by its nature is not common. That’s one point I want to make. The second point is that about lowering our standards. Listen — it's not because we're Africans [that] we accept any lower standards. We have to maintain our standard and our dignity. We really need to dispel this [notion] that Africa can do with much lower standards in anything. No — we don't. We have to maintain the credibility of the prize and our credibility as well. That's important.

Mo Ibrahim is a Sudanese-British entrepreneur and philanthropist and the initiator of the Mo Ibrahim Prize for Achievement in African Leadership.

US State Department: 'We're looking at Africa in 2050'

We need to create jobs, help facilitate trade and address the challenges of the Africa of the future, says Donald Yamamoto, who is in charge of African affairs at the US State Department. (17.11.2017)