Dozens of journalists have been killed or disappeared while reporting on the conflict in Syria. Those who get home safe, like Bunyamin Aygun, receive a hero's welcome, while the families of the missing wait in despair. 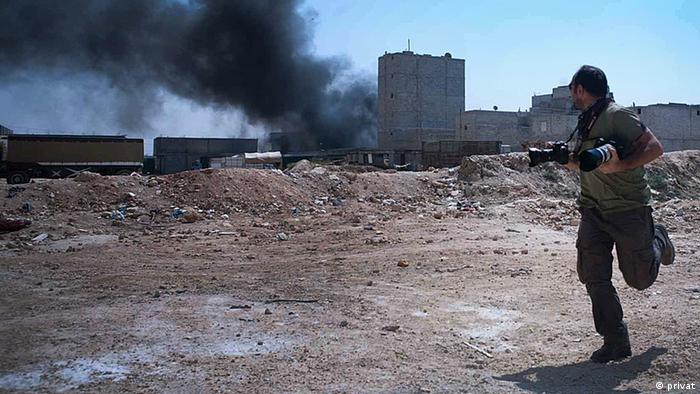 At an airport in southern Turkey, friends and family waited anxiously for Bunyamin Aygun to walk through the security doors. When that moment came, they couldn't believe he was safe, back in Turkey. Neither could Aygun.

"I am so happy," he beamed. "I don't know what to do … to sleep or not because the dreams were very real there."

Still nervous and unraveled by his experience, he recounted what he could to the crowd of waiting journalists shuffling around him.

For 40 days, he had been held, blindfolded with his hands bound, in the basement of a house in the northern Syrian town of Killi.

"They didn't tell me who they were," he answered to one of the many questions being asked. "When my eyes were open, their faces were covered. When I asked, they didn't answer my questions. All they said was that they are not from Assad's side."

He had gone to Syria for what friends said was "one last story" - an interview with a Turkish businessman - when two cars pulled up and took them both away at gunpoint.

Rather than reporting the story, Aygun had now become the story.

"You're in a war environment, and you are blamed for being a spy," he recounted. "It was tiring, but they didn't make me suffer physically, they didn't torture me." 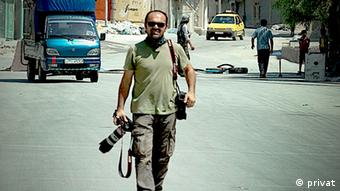 Aygun, here in Aleppo in 2012, was accused of being a spy

His nightmare finally came to an end after three days of intense fighting. Aygun does not know if the clashes were an operation to save him or the regular toils of war.

"When it ended, someone came up to me and said: 'We are from the Free Syrian Army, you can now go.'" He was handed over to members of the Turkish intelligence 15 kilometers (nine miles) from the border.

Aygun later learned that the group holding him was the al-Qaeda-affiliated Islamic State in Iraq and al-Sham, who are believed to be holding other journalists and Syrian activists.

The vast majority of kidnappings over the past six months have occurred in opposition-held parts of northern and eastern Syria, where al-Qaeda-linked rebel groups are particularly strong.

Remarkably, Aygun's release came only hours after a mass demonstration in Istanbul calling for the release of all journalists missing in Syria.

"Bunyamin is not the only prisoner journalist in Syria," announced a spokesman over a megaphone to a crowd of thousands. "In total, 30 journalists from Syria, Sweden, France, Spain, Poland, Palestine, Jordan and Turkey have been lost, captured or imprisoned in Syria."

Bashar Kadumi is one of those 30. He was working for the US government-funded Arabic language channel al Hurra TV when he vanished in Syria.

His wife, Arzu Kadumi, hasn't spoken to her husband in over 500 days. "On the first day of Ramadan he told me he was going to go to Aleppo and do a story on how the people in Syria celebrate the Islamic month," she tells DW.

Since the war started, Bashar Kadumi had been tracking developments, traveling in and out of the border areas. But this would be his first time to Aleppo.

He was travelling with Turkish cameraman Cuneyt Unal and a crew from Japanese TV.

"We heard in the news that there were very serious clashes in Aleppo when he was there" Arzu continues looking into the distance, "and unfortunately during one of those clashes, my husband was injured and his cameraman was captured."

Following the news, a special committee of Turkish journalists and members of parliament was set up to gather what information they could on missing members of the press in Syria.

However, Bashar's case stands out because he is a Jordanian Palestinian from Jerusalem.

"He was treated like an Israeli spy," Arzu says. "Assad's assistant met our committee and told me that 'because your husband is Palestinian and lives in Jerusalem, he has ties to Israel.'"

Israelhas long been seen in the region as an enemy for its treatment of Palestinians. And now with more fanatical elements involved in the war, such as al Qaeda, any association with Israel radicalizes suspicions.

Arzu has done a number of interviews about her missing husband, yet the tears flow as if it were her first time recounting the news. She stares at the two pictures of Bashar she holds for the interview and with all the hope she can muster whispers through tears: "In my heart, I feel like nothing bad has happened to him. God knows everything and he gave me this feeling."

On the 20th of every month she joins other journalists and friends in a small protest outside the Syrian consulate in Istanbul to demand answers. None have ever come.

"The Syrian government said they've checked every hospital, every prison, but couldn't find any records of Bashar," she explains. "They say he's not here in Syria."

Then just before the tears start to flow again, her hope returns: "But it's not a very trustable environment. It's a war environment. People are not tracking everything … they can't track everything." She gazes at me seeking reassurance.

In a war that has already claimed over 130,000 lives, Bunyamin Aygun was incredibly lucky. But as the war nears its third year, optimism about the others is becoming harder and harder to find.

Roth: 'The Syria situation is abysmal'

Human Rights Watch has just released its 2014 World Report which, among other things, deals with the topics of Syria and the NSA scandal in the US. Executive Director Kenneth Roth spoke with DW about the new report. (21.01.2014)

The media freedom watchdog Reporters without Borders has noted a decrease in number of journalists killed across the world in the course of duty. But it says the toll is still high compared with previous years. (18.12.2013)

When the first US tanks entered Baghdad, architect Ghaith Abdul-Ahad grabbed his camera and took to the streets to document the fighting. Ten years later, he's one of the world's most prestigious war photographers. (09.04.2013)