Landslides around the Chilean capital of Santiago have contaminated a major river and cut off the drinking water supply to around 4 million people. Officials have said that at least three people have died in the floods. 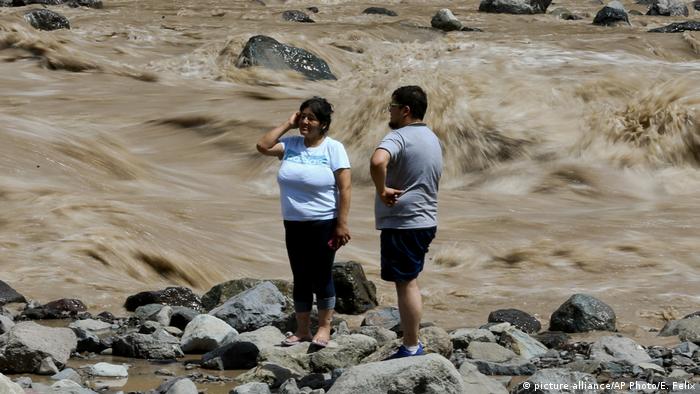 Emergency officers reported that landslides and falling debris caused by waters running down the Andes were contaminating the Maipo River.

The Chilean government has ended a state of emergency and says no significant new fires have broken out. This comes after over two weeks of devastating forest fires in the South American country. (05.02.2017)

At least three people were killed in the rainstorms and several others were missing, authorities said on Sunday.

"We are talking about 1.45 million homes that are going to be affected by the cutting off of the water supply, which will be total or partial in 30 districts" of Santiago, Claudio Orrego, the region's governor, told reporters. More than 60 percent of the capital's 6.5 million inhabitants are likely to be affected.

"We still do not know when the drinking water will be turned back on," Orrego said.  "We cannot guarantee resumption of the service until the River Maipo clears up."

Another 373 people in a mountain valley near the capital were isolated after the nearby river banks overflowed.

Chile's president, Michelle Bachelet, wrote on Twitter: "Emergency teams are working on the ground to connect with isolated persons and re-establish the water supply wherever possible."

Chile's national emergency services reported that a 12-year-old girl was killed in the O'Higgins region after a landslide swept away the car she was in. Santiago officials also said they had recovered two bodies from a river just outside of the capital.

The death toll could quickly rise, however, with as many as 19 people still reported missing according to Reuters news agency.

A summer of havoc

These were the second major floods to hit central Chile in the past year. In April, one person was killed after heavy rainstorms battered the San Jose de Maipo valley.

Subsequent flooding also forced some of the world's largest copper mines, located in the region, to shut down production.

Chile had just this week declared an end to a state of emergency after a series forest fires devastated large parts of the country.