Militant fighters have pushed toward Iraq's capital Baghdad after capturing several towns and cities in a bold offensive. The Iraqi parliament is due to meet to consider imposing a state of emergency. 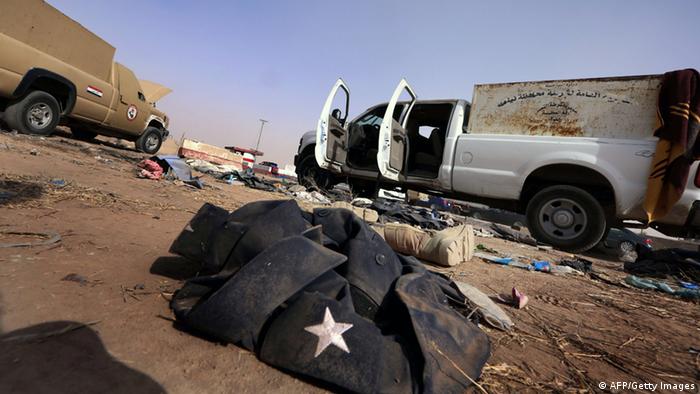 Fighters from the Islamic State in Iraq and Syria (ISIS) pushed toward Baghdad on Thursday, continuing a three-day offensive in the country's Sunni heartland.

The Iraqi government has failed to stop the ISIS fighters, who on Tuesday first took control of the country's second largest city, Mosul in northern province of Nineveh. On Wednesday, the militants seized control of Tikrit, which lies 170 kilometers (105 miles) north of Baghdad. The Iraqi air force responded with airstrikes in an attempt to keep the rebels from entering the city, according to state television.

The capital, however, did not appear to be in imminent danger from a similar assault, despite an increase in Sunni insurgent car bombings and suicide attacks in recent months.

The splinter al Qaeda group has controlled the city of Fallujah for the past five months and has mounted raids in recent weeks in other parts of Iraq. It has also taken advantage of the civil war in neighboring Syria to gain a foothold there, where it is seen by some as the most capable of those forces fighting President Bashar al-Assad. The group is believed to be fighting to establish an Islamist emirate that would straddle Syria and Iraq.

Leaders of Iraq's political factions, including Maliki and the Sunni speaker of the parliament, Osama al-Nujaifi, met late Wednesday in the capital Baghdad to discuss the situation.

Independent television Alsumaria reported that during the meeting they, "underscored the importance of national participation" in the decision-making process.

Maliki was re-elected in April after promising to bring Iraq's insurgency under control.

The United Nations has condemned the violence with Secretary General Ban Ki-moon urging "the international community to unite in showing solidarity with Iraq as it confronts this serious security challenge."

The capture of Mosul alone prompted as many as 500,000 residents to flee the city, home to some 2 million people, and the surrounding area.