Chinese appliance firm Midea has announced it has launched a cash offer for a stake of 30 percent in German industrial robotics supplier Kuka. The takeover bid has stoked controversy in Germany and Europe. 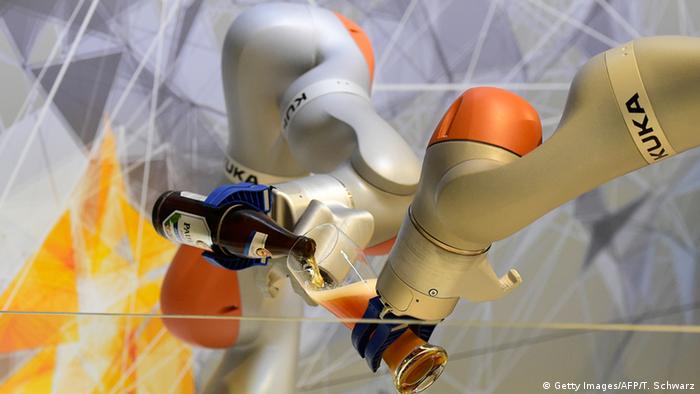 Midea said on Thursday it would offer 115 euros ($130) per share to Kuka owners under efforts to become the biggest single shareholder in one of the world's leading manufacturers of industrial robots.

The Chinese appliance maker, which is so far only known to be producing washing machines and air conditioners, also said its offer would end July 15, with no ceiling on the percentage of shares it was aiming to buy.

Kuka shares closed at just above 106 euros in trading at the Frankfurt Stock Exchange on Wednesday. The stock gained about 26 percent since the deal was first proposed in May.

Although Midea claimed it had no intention to end up in a position of "domination" over the German company, the deal raised concerns in Germany and Europe about the transfer of crucial high-end technology to China.

Kuka, based in the German city of Augsburg, is a leading manufacturer of industrial robots and also offers automated systems for manufacturing, including for Germany's all-important automobile industry.

Several media outlets have reported recently that the takover has run into opposition from a number of officials in Brussels and Berlin - an allegation denied by the German government.

German chancellor Angela Merkel told reporters during a visit to Beijing early this week that Berlin was looking into a solution which could "satisfy both sides."

German companies are increasingly in the focus of a Chinese investment drive for which the government has made huge sums available to buy up foreign industrial know-how and improve Chinese companies' balance sheets amid slowing growth.

Among the German firms targeted have been fork-lift maker Kion, concrete pump manufacturer Putzmeister and arms industry heavyweight KraussMaffei which are all under Chinese ownership now.

Midea, which garnered revenue of more than $22 billion last year, hopes to gain access to the world's leading market for industrial robots. China already accounts for a quarter of global sales, according to the International Federation of Robotics.

"As a traditional producer of durable consumer goods, Midea's domestic market is almost saturated," Huang Fusheng, an analyst at China Securities, told the news agency AFP. The company "needs to expand industries and transform, so this [investment] is a necessity", he added.