Germany may head off Chinese takeover of robotics firm Kuka | Business | Economy and finance news from a German perspective | DW | 01.06.2016

A German newspaper says the government is trying to put together a consortium of European investors to buy Kuka, a leading German robotics maker. The aim is to prevent a takeover of Kuka proposed by a Chinese firm. 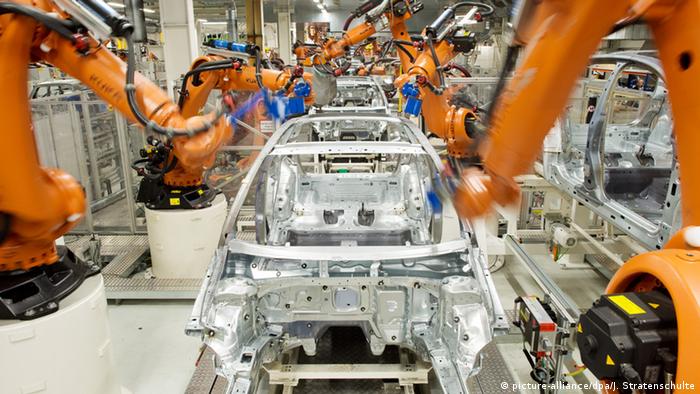 According to a report in the "Süddeutsche Zeitung," one of Germany's leading newspapers, German Minister of Energy and Economy, Vice Chancellor Sigmar Gabriel, is opposed to a Chinese takeover of Kuka, a company based in Augsburg, Bavaria, that makes industrial robots.

Midea, a Chinese maker of heating, ventilation and air conditioning systems, on May 18 haddeclared its interest in acquiring a total of more than 30 percent of Kuka shares, at 115 euros ($130) per share, valuing the company at about 4.6 billion euros. Kuka had sales revenues of just under 3 billion euros in 2015.

Midea said it was interested in expanding its product range. Kuka, for its part, could benefit from an expanded presence in Asia through Midea's large distribution network, analysts said.

However, Sigmar Gabriel is trying to put together an alliance of German or European companies to buy Kuka instead, according to "Süddeutsche Zeitung."

The newspaper quoted the minister as saying, in a Tuesday morning interview in Berlin: "We have to watch out that there's no China-bashing going on," and that in the end, it's up to shareholders to decide whether to sell their shares to Midea, "but I would be very pleased if there was an alternative offer based in Germany or Europe, to give shareholders that option."

"Süddeutsche Zeitung" went on to say that according to "informed circles" in government and industry, Gabriel has been actively attempting to encourage German or European companies to take an interest in buying Kuka - although Gabriel was unwilling to discuss details in Tuesday's interview.

"Naturally you can imagine that in the past days and weeks, we've had a series of discussions in order to move forward all those options," Gabriel told "Süddeutsche Zeitung."

Siemens, ABB and various German auto makers are among the companies that have been mooted by analysts as possible European investors in a buyout of Kuka. However, so far, none of them have shown any interest in the idea, at least not publicly.

A pearl of German industry

Kuka, which was founded in 1898 in order to make generators. It evolved into a maker of machines and equipment in a number of domains. In recent years, it has become Europe's leading maker of industrial robots and automated productions systems supplying several industries, including automotive, medical, solar, and aerospace equipment manufacturers.

In the 2013 picture at top, Kuka industrial robots are at work in a Volkswagen factory in Wolfsburg, Germany, making Golf cars.

Dieter Zetsche is the chairman of ACEA, the European Automobile Manufacturers Association as well as the CEO of Daimler, the maker of Mercedes-Benz automobiles. Zetsche said on Tuesday in Berlin that he sees no risk in the Chinese interest in investing in Kuka. So far, he said, there have been no negative developments in relation to Chinese shareholders of companies in the car-making supply chain in Germany or Europe.

"There is no proof that such an intention [Midea's intention to take over Kuka], if it were realised, would present a risk," Zetsche said, adding however that this was his personal view - he was not speaking for ACEA or Daimler on the matter.