Mexico′s drug war leaves a path of destruction | World | Breaking news and perspectives from around the globe | DW | 06.01.2012

For the first time in years, the number of deaths in Mexico's savage drug war has dropped, but now attacks by the military are increasing. The only hope left is a strong civil society. 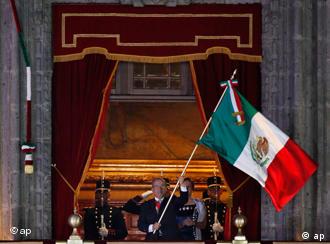 Mexico's president has unleashed a fierce war against the drug mafia

President Felipe Calderon of Mexico is twittering a lot these days. "Prosperity and success" was his New Year's message. For Christmas, he wished his countrymen "paz y armonia" - peace and harmony.

Just a few weeks before, two political bloggers were found hanging from a bridge in Nuevo Laredo, tortured to death by the country's infamous drug cartel "Zeta".

Due to constitutional term limits, Calderon cannot be re-elected next year, but he would like to go down in history as the president, who stood up to the drug mafia.

If anything is historical, it is the number of drug-related murders in Mexico over the last five years. Since Calderon took office, more than 50,000 people have died, 12,000 of those in 2011. The year before that, the number was even higher: 15,000. 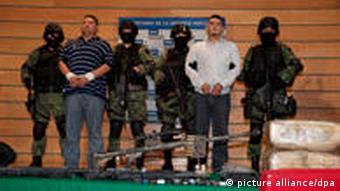 In addition, as many as 10,000 people have disappeared without a trace, depending on who is counting. Anne Huffschmid, a Latin America expert at Berlin's Free University, calls it "a devastating escalation of violence" that has hit the average Mexican especially hard. "Mexico has experienced neither a military dictatorship nor a war recently or in the last century," Huffschmid says.

The disfigured and tortured bloggers are no isolated incident, but rather part of a barbaric strategy perpetrated by the drug cartels. Usually the bodies of drug war victims killed by rival gangs are piled up on public squares, says the journalist Sandra Weiss, who lives in Mexico.

"Some states are as lawless as the old Wild West," she explains. "Drug cartels tell people on what days they may not leave their homes. Anyone on the street after 10 p.m. is considered an enemy and shot," she says.

The drug gangs control daily life with an iron fist in some areas, particularly in the north.

"In Chihuahua people can only go to the bank in the morning and in groups. In Monterrey, long famous as a boisterous party town, there is no more night life," says Weiss. The intention is clear: civil society is being intimidated to enforce a culture of silence. 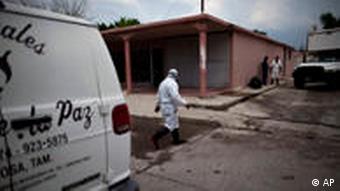 After letting the cartels run amok and after many of the country's policemen ended up on the payrolls of the mafia, President Calderon in 2006 decided to send in the army to battle the drug lords.

For Anne Huffschmid, this was tantamount to a "militarization of a conflict which had already seen an alarming increase in violence, and which was now being stoked even more."

"Now there were even more murders. The army became just another factor of violence; in short, it contributed to the brutalization of the conflict," explains Huffschmid.

The Washington Post quoted statistics in a December story from Mexico's National Human Rights Commission. In the last four years, more than 300 mass graves with more than 1,000 corpses were discovered – a legacy of the drug cartels.

Human Rights Watch, on the other hand, cites figures in which members of the military, since the beginning of Calderon's presidency, were responsible for nearly 200 instances of torture, some 40 kidnappings and more than 20 summary executions.

Amnesty International says it has more than 6,000 complaints of human rights violations allegedly committed by the military.

"Houses were searched with brutal force; at roadblocks, civilians are sometimes shot at," reports Sandra Weiss. "Repeatedly, there are text messages, emails and twitter feeds warning people here and there not to venture out on the street. Panic is being systematically fomented until no one knows what is actually true," she says.

Armed patrols on the streets

Military units patrol the streets, but have done little to provide residents with a sense of security. 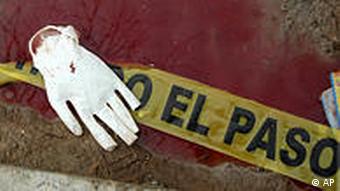 Mexico is a transit route for drugs to the US

"Mexico was always the most important transit route for drugs, but President Calderon's decision to deploy the army on the streets was a radical measure that completely altered everyday life," notes Weiss.

In many cases, the Special Forces were trained in the United States, a rather bizarre paradox considering that the US is the largest market for illegal drugs from Mexico.

One of the biggest problems is the inadequate law enforcement, which often gives members of the military carte blanche to rape, torture and murder, says Amnesty's Mexico specialist, Isabel Meyer.

"As the militarization of Mexico increases, the number of human rights violations on civilians has grown significantly - on immigrants and women - and journalists are intimidated, attacked, and can no longer report freely," Meyer says.

For Anne Huffschmid, Mexico's only chance to break the spiral of violence, fear and silence is a strong civil society.

A modest peace movement has sprung up since last year, led by a nationally known author whose son was murdered in the drug war. This still nascent uprising could finally put an end to the silent rage of many Mexicans and channel their indignation.

As Mexico's drug war enters its sixth year, activists say its time for the United States to stop the flow of dollars and guns to the drug cartels. Legalizing drugs, they argue, could save thousands of lives. (02.01.2012)

Mexico is caught up in a battle with drug gangs that has killed tens of thousands. The country is watching California and an upcoming vote on drug legalization as some wonder if it could be one way to stop the bloodshed. (25.10.2010)

The killing of one of Mexico's most wanted drug cartel leaders last week is being heralded as one of the most significant victories in the on-going war against increasingly violent and militarized narcotics gangs. (02.08.2010)