As Mexico's drug war enters its sixth year, activists say its time for the United States to stop the flow of dollars and guns to the drug cartels. Legalizing drugs, they argue, could save thousands of lives. 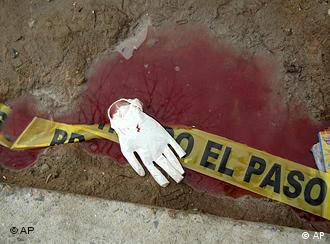 Mexico's war on drugs costs thousands of lives each year

As the presidency of Mexico's Felipe Calderon winds down, his legacy is set to be defined by the war he launched against the drug cartels within days of his election in December 2006.

The five-year conflict has not had a significant impact on the quantity of drugs sold by the cartels. This fiscal year, the amount of drugs coming from Mexico seized by US border agents increased by 48 percent. But the war has come at a terrible price to Mexicans, killing more than 45,000, displacing 230,000 and exposing the state's corruption and inability to protect its citizens.

The candidate who convinces Mexicans that he or she can restore peace and justice to their country will likely win the presidential election next July.

But some say that regardless of who is elected, the only effective way to take away the cartels' profits and power is for the United States to change its drug laws. It's a message those pushing for an end to the drug war in Mexico hope Americans will hear.

The face of that movement is Javier Sicilia, a celebrated Mexican poet who was moved to action by the murder of his son Juan Francisco by the Gulf Cartel in March. When he buried his son, Sicilia recited his last poem. 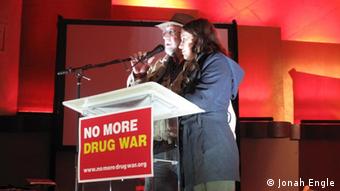 The world is not worthy of words
they have been suffocated from the inside
as they suffocated you, as they tore apart your lungs...

Since then, Sicilia has led marches to Mexico City and Ciudad Juarez, the epicenter of the country's violence. The Movement for Peace with Justice and Dignity, as it is called, seeks an end to Calderon's militarized drug policy and a thorough reform of national institutions, which they say are corrupt. With over 90 percent of deaths in the conflict uninvestigated, they also want to see justice for their loved ones.

"It's as if we were counting not humans but cockroaches or bugs and it's completely enmeshed in a context of impunity," Sicilia said.

After spending six months pressuring the Mexican government to end the war, activists in Mexico are increasing their pressure on the United States. In November, Sicilia spoke at the International Drug Policy Reform Conference in Los Angeles.

A plea to Americans

At a rally in MacArthur Park, Sicilia called on Americans for help. "In this war, clearly my country has a great deal of responsibility," Sicilia said. "But the US also has its responsibility, drug prohibition and the arms industry that illegally sends weapons to my country are killing us and destroying us and we have to stop it together." 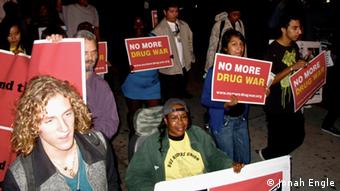 The United States is simultaneously the world's leading consumer of illegal drugs and the biggest force working for their continued prohibition around the world. Critics of American drug policy argue the results are much like the prohibition of another drug in the 1920s, alcohol.

Making drugs illegal hasn't made them less accessible but it has inflated their value and created a multi-billion dollar black market, all of whose profits enrich organized crime. Conflict over control of that trade is driving drug violence in Mexico. The cartels are able to challenge the authority of the Mexican military and police thanks to lax gun laws in the US that allow them to get their hands on assault weapons which are illegal in Mexico.

Sicilia and others say that legalizing drugs would remove the cause of the conflict and deprive criminals of the wealth they have used to buy weapons, and corrupt police and public officials. By saving billions in spending on prisons, police and the army, the state could instead focus its resources on dealing with drug abuse by investing in treatment and prevention.

Susie Byrd is a city councilor in El Paso, Texas. Last year, it was the safest city in the United States with a population of over 500,000. Meters away, on the other side of the border, lies Ciudad Juarez, one of the deadliest places in the world.

"The prohibition markup is why lives are being lost in Juarez," Byrd said. "You can buy a pound of marijuana in the Golden Triangle in Chihuahua for $25 (19 euros) and you can move it to Chicago and at the wholesale market sell it for $525 (406 euros) dollars a pound. The single biggest assault you can take against the cartels is legalizing marijuana and making it so that they can no longer profit." 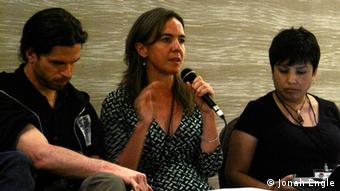 According to Lewis, the issue that has gained the most traction is gun control, specifically a campaign to reinstate a ban on imports of assault weapons that lapsed in 2004.

While talk of legalizing drugs is a non-starter in Washington, it's a position that is finding growing support in Latin America in countries that have borne the brunt of the War on Drugs. The last two presidents of Mexico and former presidents of Colombia and Brazil have said it is time to experiment with legalizing drugs and treat them as a public health issue, like we do alcohol.

Because the United States is the world's biggest market for illegal drugs, and because of the pressure it brings to bear on other countries to pursue its law and order approach to drugs, reformers say the violence will only end if the United States legalizes drugs. But for that to happen, they say, pressure will have to come from within the country; something the current President of Colombia alluded to in November when he expressed support for legalizing drugs.

"A new approach should try and take away the violent profit that comes with drug trafficking," President Juan Manuel Santos said. "If that means legalizing, and the world thinks that's the solution, I will welcome it."

But even as he made that bold statement, Santos underscored the risks in challenging Washington's orthodoxy. "What I won't do is to become the vanguard of that movement because then I will be crucified."

Knowing that for change to come, Americans must demand it, Sicilia has announced plans for a new march from Ciudad Juarez to Washington, DC.

Mexican drug cartels are looking to exploit social and political problems such as poverty and weak governance in neighboring Central American countries to expand their narcotics operations beyond Mexico's borders. (09.05.2011)

Mexico is caught up in a battle with drug gangs that has killed tens of thousands. The country is watching California and an upcoming vote on drug legalization as some wonder if it could be one way to stop the bloodshed. (25.10.2010)

The killing of one of Mexico's most wanted drug cartel leaders last week is being heralded as one of the most significant victories in the on-going war against increasingly violent and militarized narcotics gangs. (02.08.2010)