Former Germany national team player Mesut Özil had dinner in Istanbul with Turkish President Erdogan. Özil has addressed the disrespect and discrimination he faced from the German public and German Football Association. 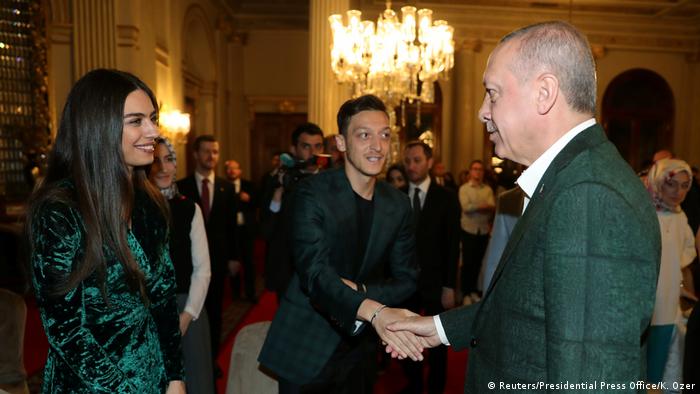 Arsenal midfielder and former German national team player Mesut Özil came under fire on social media on Sunday after having a Ramadan iftar meal with Turkish President Recep Tayyip Erdogan. Özil and his fiancee, Amine Gülse, were Erdogan's guests at the event in Istanbul ahead of Turkey's Youth and Sports Day.

Photographs showed Özil and Gülse sitting on either side of Erdogan at the Dolmabahce Palace, which was once the administrative heart of the Ottoman Empire. 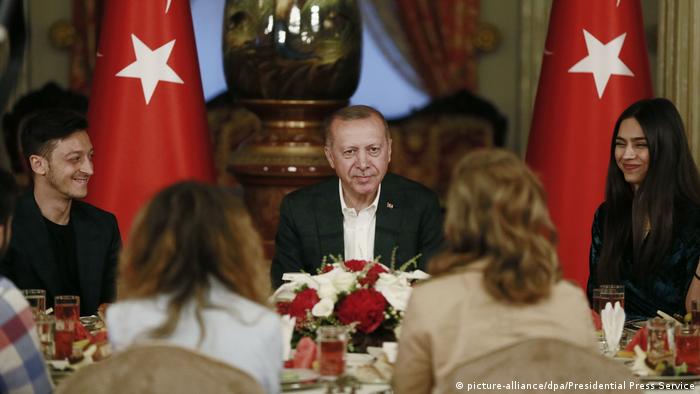 Özil was previously criticized, along with Germany teammate Ilkay Gündogan, for appearing in a photo op with Erdogan ahead of last year's World Cup in Russia.

Despite being the lead goal scorer for Germany when the team won the 2014 World Cup, the photo led to claims that Özil had divided loyalties. In his response, he highlighted his frustration with the institutional racism at the German Football Association (DFB).

At the time, Özil said he was "respecting the highest office of my family's country." He compared the unfavorable coverage he received to the muted response after former German national team captain Lothar Matthäus met Russian President Vladimir Putin.

Several of Özil's white teammates and DFB leaders denied that there was any racism in German soccer. Özil retired from the German national team after its disappointing performance in the 2018 World Cup in Russia.

The Turkish presidential office has previously announced that Erdogan was invited to Özil and Gülse's wedding.

As horror year continues, what now for Mesut Özil?

After the furore surrounding his decision to quit the national team, Mesut Özil sought solace at his club, Arsenal. But right now, he can't even get a game. With critics piling on, what's next for the divisive playmaker? (07.12.2018)

In an interview with Germany's biggest newspaper, Reinhard Grindel has said he wished he had stood by Mesut Özil in the face of racial abuse. The DFB president also called for changes in Die Mannschaft. (18.08.2018)