Failure to act on climate change will have dreadful consequences, Angela Merkel has warned. Diplomats from 35 nations gathered in Berlin to jump-start climate talks bogged down by deep rifts among UN member states. 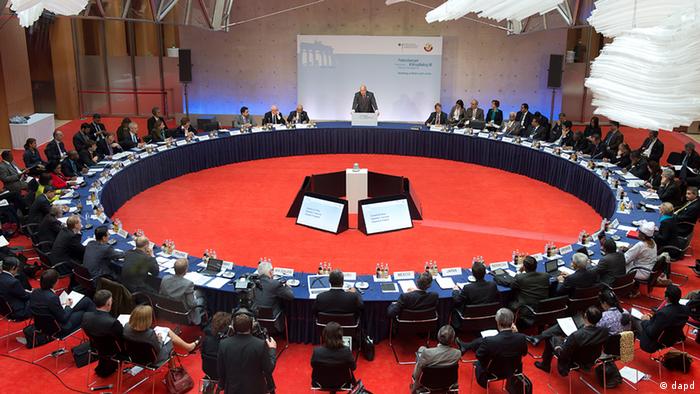 At the Petersberg Climate Dialogue, the German chancellor said that the current voluntary commitments to reduce emissions of gases may not prevent global mean temperatures from rising 3-4 degrees Celsius (5-7 degrees Fahrenheit). The current target is an increase of 2 degrees Celsius.

"There's nothing to be gained by playing for time," Merkel said, delivering a keynote speech to open the major climate conference in Berlin on Monday.

In advance of a UN climate conference in Qatar, Deputy Prime Minister Abdullah bin Hamad Al-Attiyah said his country is making efforts to cut its own carbon emissions, the highest per capita in the world. However, he also conceded that it would be "difficult" to get the nations of the world to unite behind action to cut the emissions that are a main cause of rising temperatures. "We need her in Qatar," he said of Merkel.

Work is currently under way on an international climate treaty to be signed by 2015 and go into effect by 2020. Merkel was Germany's environment minister in the 1990s and helped negotiate the Kyoto Protocol.

China and the United States, two of the world's principal emitters, are part of the 35-nation panel.