Germany's Merkel and Niger's Issoufou have met in Niamey to discuss migration, aid and security. The chancellor shot down Issoufou's suggestion of a "Marshall Plan" for northern Africa. 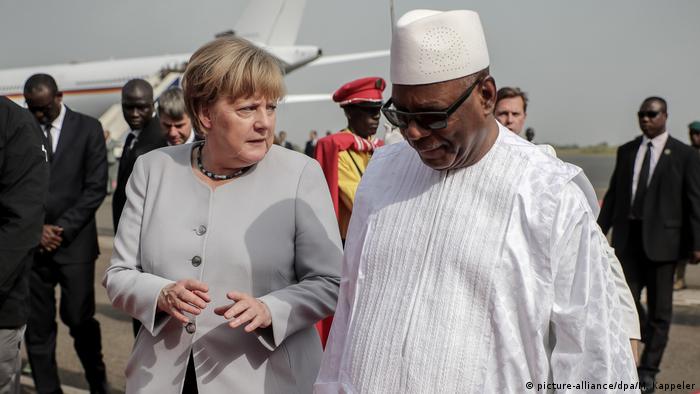 German Chancellor Angela Merkel arrived in Niger on Monday for the second leg of her three-day tour of Africa. Germany's leader stressed the need for security and development to fight brain drain and, consequentially, migration to Europe.

"The chancellor and I agreed that we have to curb irregular migration, especially people trying to migrate through the desert and dying by the hundreds," said President Mahamadou Issoufou at a joint press conference after bilateral talks in the capital, Niamey.

To that end, he said, Niger needs a "Marshall Plan" to promote development. He said the 1.8 billion euros ($2 billion) in an EU fund for the transit and origin countries of irregular migrants was not enough for his country battling Islamist militants spilling over its borders from neighboring countries and fighting the effects of climate change.

Merkel demurred at this suggestion, however, saying that it was more important to first ensure that the funds were funneled efficiently. If it was then determined that the amount was too little to make a difference, then Germany would consider sending more aid, the chancellor said.

The German leader has used her Africa trip to stress the importance of developing higher educational standards across the continent. In Niamey, she called on the government to use European aid to finance schools and training schemes. While in Mali on Sunday she told reporters that "it is very important that African countries do not lose their best brains," and pledged assistance to Bamako in fighting off rebel Islamists.

More than 550 soldiers are currently serving in Mali as part of a UN peacekeeping mission.

The chancellor is set to conclude her tour on Tuesday with a visit to Ethiopia amid an increasingly tense situation. The administration in Addis Ababa recently instated a six-month state of emergency in a massive crackdown against anti-government protests.

German Chancellor Angela Merkel is visiting three African countries in three days. The pressure caused by illegal migration across the Mediterranean has forced the Chancellor to revisit the continent. (10.10.2016)