Merkel stresses need to 'rebuild trust' with US

Chancellor Angela Merkel has said that trust between Germany and the US needs to be re-established after allegations arose that her cell phone was being monitored. Other European leaders have expressed their concern. 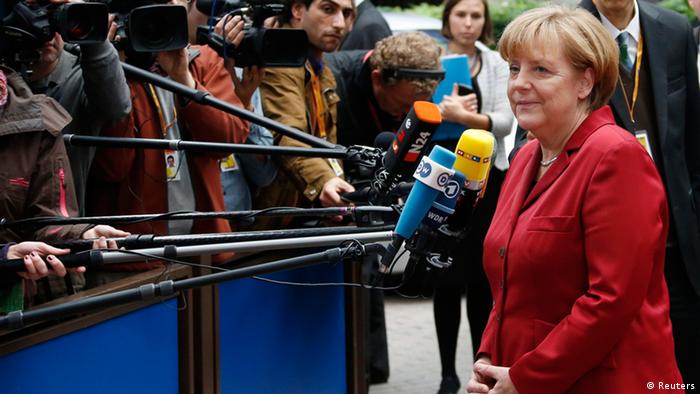 On her way to a gathering of European leaders on Thursday, Merkel told reporters that the surveillance of her mobile communications, if proven, would prove cast a shadow over relations with Washington.

"Spying between friends is simply unacceptable," Merkel said as she arrived for the two-day European Union summit in Brussels. "We need trust between partners and such trust needs to be re-established," she said.

Merkel added that the allegations, if proven, would constitute a serious breach of trust.

"We are allies facing challenges together. But such an alliance can only be built on the basis of trust. I repeat that spying among friends is not at all acceptable against anyone and that goes for every citizen in Germany."

Swedish Prime Minister Frederik Reinfeldt said, while data gathering was necessary in counter-terrorism operations and in thwarting crime, the notion of spying on foreign leaders was unacceptable. "It should not be used to listen to each other, when we look at elected leaders," he said.

Merkel spoke to Obama on Wednesday after receiving information her cell phone may have been monitored. The allegations first arose on the website of the news magazine Spiegel.

The reports are only the most recent to emerge from information divulged by former US intelligence contractor Edward Snowden about the extent of a US spy programme run by the National Security Agency (NSA).

The European Justice commissioner, Viviane Reding, said on Thursday that the latest reports of the US National Security Agency spying not only on European citizens, but also Chancellor Merkel, demanded a "a strong and united" approach to data security.

"Data protection must apply no matter if it concerns the e-mails of citizens or the mobile phone of Angela Merkel," Reding's spokesperson told reporters in Brussels, just hours before the bloc's 28 heads of state and government were to open the summit.