Merkel party members aim 'to reconcile the social with the national'

Germany "must reconcile the social with the national," a state politician said, using a phrase that to many resembled National Socialism. Now Merkel's CDU has had to reiterate it won't cooperate with the far-right AfD. 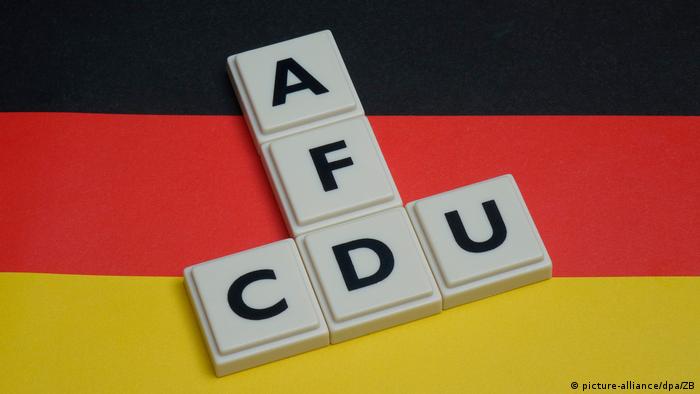 Members of German Chancellor Angela Merkel's center-right Christian Democrats (CDU) have once again found themselves forced to declare that they will not work with the far-right Alternative for Germany (AfD) party after CDU lawmakers said their party needed to "reconcile the national with the social."

This comment, made to the Mitteldeutsche Zeitung by two CDU members of parliament in the eastern state of Saxony-Anhalt, led to intense criticism from nearly all sides of the political spectrum in Germany. As many on social media and elsewhere were eager to point out, it closely resembles the term National Socialism — more commonly known in English as Nazism.

On Thursday, CDU General Secretary Paul Ziemiak took to Twitter to list four times his party said it would not work with the AfD: "One more time for everyone taking notes: the CDU strictly rejects any coalition or cooperation with the AfD!!!"

Ziemiak was the latest in a series of CDU officials to issue such a declaration against the populist party. One day earlier, Merkel's successor as leader of the CDU, Annegret Kramp-Karrenbauer, said the "hate and incitement" of the AfD was partly to blame for the recent death of pro-immigration politician Walter Lübcke, possibly in a "far-right extremist attack."

A fractured vote in 2016 has led to a three-party coalition in Saxony-Anhalt, where the CDU is the senior partner with the center-right Social Democrats (SPD) and Green party, even though the AfD came in second place in that vote.

With this in mind, CDU co-chairs in the state parliament in Magdeburg, Ulrich Thomas and Lars-Jörn Zimmer, wrote what they called a memorandum, which was seen by the daily Mitteldeutsche Zeitung, urging their conservative party colleagues to reconsider its blanket ban on working with the populist AfD.

Thomas added that while the CDU could not currently form a government with the AfD, his party "should not completely discount a coalition…we have to see which way the wind blows," in the future. He said the AfD had both radical and liberal wings it was worth watching to see which side came out on top.

Thomas and Zimmer wrote that AfD voters and CDU voters had some common goals.

The statements prompted outrage from the CDU's coalition partners, the SPD and the Green party, who demanded the Saxony-Anhalt CDU make an unequivocal declaration that it would not work with the AfD.

Shortly thereafter, the state leaders of the CDU issued a statement saying that "there will be…no institutional or strategical" cooperation with the nationalists.

Since the AfD morphed from an anti-Eurozone group into an Islamophobic, nationalist party in 2015, the CDU has several times had to have the internal debate over whether to work with them as Merkel moving her party towards the center has led many CDU voters to flock to the more conservative AfD.

Kramp-Karrenbauer: CDU will win voters by its own strength