Chancellor Angela Merkel has called on EU leaders to solidify plans for economic integration over two to three years. She spoke in Brussels before visiting London for talks with PM David Cameron on the 2014-20 EU budget. 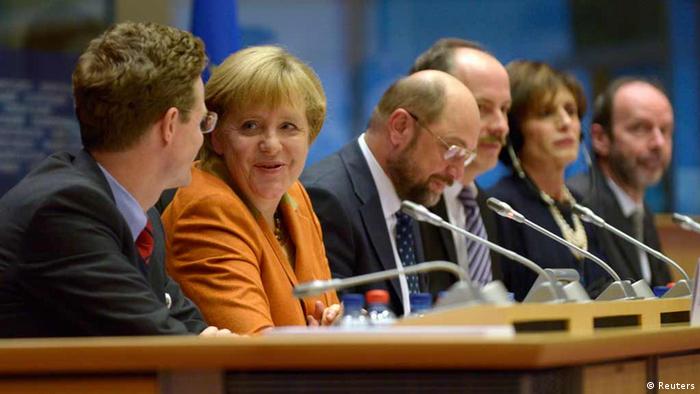 In a speech to the European Parliament, Merkel said the eurozone must press reforms and draw a roadmap for unity. Ahead of a December EU summit to deal with the debt crisis, Merkel told lawmakers that countries must allow the European Union to police budgets when necessary if the bloc is to maintain prosperity.

"Much still has to be done to win back trust in the European Union as a whole," Merkel said. "We cannot stop halfway. We have to be creative: We have to find our own new solutions."

Merkel's vision of the EU's future

She also said policies need to become "more common," adding that a pan-EU supervisory body with the power to police banks to avoid risks must be effective. She said budgets across the EU must be determined with a one-for-all outlook.

"Trust in the EU needs to be re-won," Merkel said in her speech.

Merkel also brought up complicated treaty changes as one possible solution to the crisis. Europeans also have to be "ambitious and demanding, and not shy away from a change to the contractual basis," she said.

Transferring sovereign powers over to the EU cannot be ruled out, Merkel said. She continued her lobbing for austerity measures that have restricted growth in the countries hardest hit, saying that "the effort is not in vain."

Merkel insisted that the United Kingdom is an indispensable part of Europe hours before her scheduled meeting with British Prime Minister David Cameron.

Many in Britain find Germany's interventions into national budgets intrusive. Foreign Secretary William Hague said recently that "the coalition government is committed to Britain playing a leading role in the EU but I must also be frank: Public disillusionment with the EU in our country is the deepest it has ever been."

Merkel, however, says the United Kingdom must remain a partner.

"I want a strong Britain in the European Union," she said in Brussels, rejecting suggestions that the United Kingdom should leave the bloc.

"I can't even imagine - we still have British soldiers in Germany today - that Britain would not be a part of Europe," Merkel added. "If it was to be alone today in a world of 7 billion people, I don't think that would be good for Britain."