Merkel calls for eurozone fiscal union | Europe | News and current affairs from around the continent | DW | 02.12.2011

German Chancellor Angela Merkel has told the Bundestag that the eurozone's sovereign debt crisis will take years to resolve. She said the eurozone needed a new "stability union" with tighter fiscal controls. 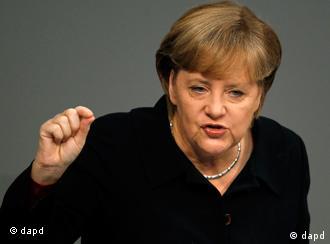 Merkel said there was no quick fix for the debt crisis

German Chancellor Angela Merkel has warned that the eurozone’s sovereign debt crisis will not be solved "overnight."

Speaking to the lower house of parliament, the Bundestag on Friday, Chancellor Merkel described the eurozone debt scare as "the worst crisis since the introduction of the euro," and said that resolving it was a process that would take years to achieve.

In a speech to outline her government’s vision for securing the future of the common currency, Merkel called for a "sustained strengthening of the European economic and currency union."

She said that the process of creating a fiscal union had already begun.

"We are not only talking about a fiscal union, we are beginning to create it," she said, adding that the changes to European Union treaties would include sanctions against member states that fail to get their deficits under control.

"Now these items are on the agenda, we are on the verge of it, there are still difficulties to be surmounted but their necessity is now widely recognized," Merkel added.

The chancellor also reiterated her rejection of so-called "eurobonds," saying they were no solution to the debt crisis.

Merkel likewise rejected opposition criticism that Germany was using its economic power to throw its weight around in the EU.

Green parliamentary party leader Jürgen Trittin accused Merkel's government of moving too slowly on reforms, saying Berlin's hesitations were threatening the survival of the eurozone and with it, German jobs.

Gregor Gysi of Germany's Left Party meanwhile called for private banks to be turned into public institutions, saying it was the power of banks and insurance companies that had led to the financial crisis.

The French president used his speech to call for major changes in how the 27-member bloc operates, saying "Europe must be refounded." 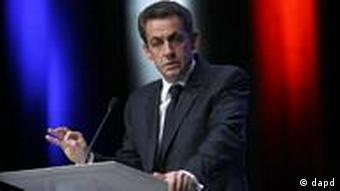 Sarkozy said Europe must be "refounded"

Sarkozy and Merkel are to meet in Paris on Monday to discuss a joint plan "to guarantee the future of Europe." Sarkozy said Germany and France were together seeking a new EU treaty to "overhaul and rethink" Europe as a way out of the crisis.

"More discipline, more solidarity, more assuming [of] responsibilities towards the people, a real economic government. That is our vision for the future of the eurozone and the future reform of the treaties," said Sarkozy.

Germany and France are Europe's largest and second-largest economies. Sarkozy spoke openly about the two countries' difficult history in his speech and their commitment to a unified Europe.

"France and Germany, after so many tragedies, decided to unite their destiny, to look to the future together. Changing this strategy would be inexcusable," he said.

"Germany and France united means that all of Europe is united and strong. France and Germany divided is all of Europe divided and weakened."

Merkel and Sarkozy have led efforts to contain the eurozone's debt problems but have not always been in agreement on the best way to do so. While France has pushed for the European Central Bank to act as a lender of last resort to eurozone governments, Merkel has argued for strict controls on national budgets.

The chancellor reiterated her position on the ECB in her speech to the Bundestag.

"The role of the European Central Bank is different from that of the Fed (Federal Reserve) or the Bank of England," Merkel said. 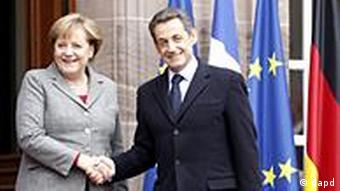 In his speech, Sarkozy acknowledged Germany’s concerns, saying that painful memories of hyperinflation after World War I had made them cautious of intervention by the ECB.

For the French and for Germans, "each has their own history, each has its own wounds," he said. "When we talk about the currency, Germany remembers its history. We must understand that and respect it."

For his part, Sarkozy assured his audience that the ECB "is and will remain independent."

"I'm convinced that faced with the risk of deflation that is threatening Europe the central bank will act," he said, adding that it was up to the ECB to decide when and how to act.

French President Nicolas Sarkozy and German Chancellor Angela Merkel have both now outlined their plans for the next round of efforts to save the eurozone. Yet concrete changes remain elusive, says DW's Bernd Riegert. (02.12.2011)

Corruption is rising in the crisis-hit eurozone, study says

Italy and Greece haven't been generating many positive headlines recently. Add to these their score - the lowest among eurozone countries - in a newly published global corruption ranking. Finland tops the group. (01.12.2011)

A week ahead of a crucial EU summit on tighter eurozone rules, European Central Bank chief Mario Draghi has hinted that the bank is ready to play a bigger role in the resolution of Europe's debt crisis. (01.12.2011)

Merkel says fiscal union is the only way