Merkel and Sarkozy present united front after meeting in Berlin | Germany | News and in-depth reporting from Berlin and beyond | DW | 14.06.2010

Merkel and Sarkozy present united front after meeting in Berlin

Chancellor Merkel met President Sarkozy in Berlin, where they discussed a joint strategy on Europe's debt crisis. Both leaders agree they want to protect the euro, but in the past they had disagreed on how to do this. 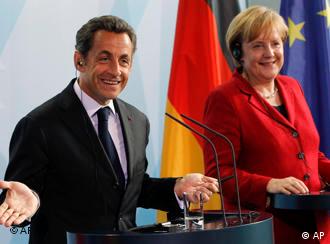 German Chancellor Angela Merkel and French President Nicolas Sarkozy presented a united front on several key issues relating to financial and economic reform after a meeting in Berlin on Monday, despite media reports that the two have had serious disagreements.

Merkel appears to have swayed Sarkozy on some issues, one of which was the suspension of European Union voting rights for countries that seriously violated the bloc's limits to budget deficits.

Sarkozy also backed Merkel's position that all 27 European Union member states should be involved in closer economic coordination, rather than just the 16 eurozone countries.

"We need stronger economic governance," said Merkel. "This must include all of Europe's 27 nations. This is the only way that we can move Europe - with its current weaknesses - forward."

Sarkozy added, however, that there was still a need for eurozone leaders to hold "rapid meetings" when problems arise.

"We saw in the crisis how the markets and speculators, which are not the same thing, were able to react in a thousandth of a second," Sarkozy said. "Our procedures need to become more operational and more pragmatic. In other words, economic government for the 27, and if necessary meetings on eurozone problems in the eurozone." 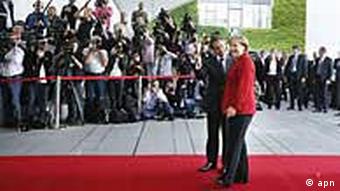 A main point of disagreement between Germany and France is the subject of budgetary discipline. Berlin says it wants to reduce its budget deficit through spending cuts alone, and Merkel's government recently unveiled an 80 billion euro ($98 billion) austerity package - the country's largest ever. France argues that doing so would choke off growth and plunge economies back into recession.

But Andreas Schockenhoff, foreign policy expert for Merkel's Christian Democrats, spoke to German radio and dismissed media reports that a major rift was developing between Berlin and Paris, saying they were fueled by domestic politics.

"We know we need stable budgetary policies over the long-term," he said. "We also know that if Germany and France set clear examples, only then will Europe be heard when important issues like international market regulation are discussed at major summits like the G-20."

Merkel and Sarkozy said they are united on the need to tighten regulations on international financial markets, and said they intended to submit a common letter to the Group of 20 summit in Canada at the end of the month. Both countries have led calls for an international bank tax to make banks contribute for future bailouts.

Berlin and Paris strive for common ground amid signs of strain

While German Chancellor Angela Merkel and French President Nicolas Sarkozy presented a united front on stricter regulation for derivatives trading on Wednesday, Franco-German relations have been difficult of late. (09.06.2010)

In a show of unity, Germany and France have written the European Commission urging it to speed up the process of financial market regulation and calling for the adoption of a ban on naked short selling. (09.06.2010)