Merkel ally warns that threat of new far-right party is genuine | Germany | News and in-depth reporting from Berlin and beyond | DW | 19.09.2010

An ally of Chancellor Angela Merkel says the emergence of a populist party to the right of the Christian Democrats is a real threat. While Merkel is less worried, she has similar ideas about quashing any such danger. 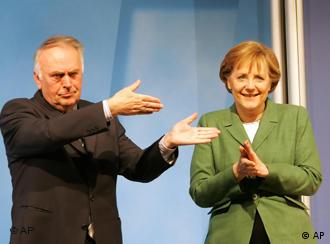 Boehmer and Merkel both think practical action will help

An ally of Chancellor Angela Merkel has warned that her Christian Democrat CDU could face a challenge if a new party were to emerge on the right.

In response to fears that the party could face a challenge on its right flank, Wolfgang Boehmer - who is CDU premier of the state of Saxony Anhalt - warned against complacency. 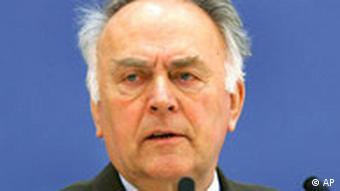 Boehmer said the party had to be constantly on guard

"The danger that a populist right-wing party might emerge always exists," said Boehmer in the German daily newspaper Hamburger Abendblatt on Saturday. "even if at the moment we cannot recognize who could lead it. We must always be on our guard and undertake everything to avoid the founding of another party to the right of our own."

When asked if the party was adhering sufficiently to its conservative roots, Boehmer said that constant vigilance was necessary.

"We have to repeatedly pose the question of whether conservatives identify with the CDU," he said.

As a mainstream party, said the premier, it was not possible for the CDU to move too far to the right. Instead, he said, the problems that were important to ordinary people should be clearly addressed. "That is the best immunization against far right extremist attitudes," said Boehmer.

Playing down the threat, Merkel told the Sueddeutsche Zeitung on Saturday that she did not believe there was a real danger.

The chancellor said that it was the responsibility of "democratic parties, to prevent the foundation of new parties on the extreme right as well as the left through our politics."

While Merkel was not as concerned as Boehmer, her ideas about how to head off any potential threat was similar. The chancellor said practical solutions to genuine grievances and concerns were the answer.

"We should do more than define what the grievances are, we have to solve the problems," said Merkel. "Then we will not need to worry about new parties on the fringe." 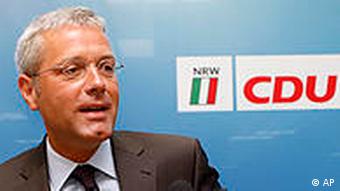 Merkel added that she would endeavor to make sure the views of conservatives were represented within the party.

Environment Minister Norbert Roettgen said that he believed that the party needed to be more open to debate, saying that its present state was "depressing."

"We must once again make the party a place for discussion and opinion-forming," he told the website of German news magazine Spiegel on Saturday.

Suggestions that a party to the right of the CDU would attract popular support were made by party conservative Erika Steinbach, who is to stand down from her post on the party's national executive board.

Steinbach, head of the German Federation of Expellees, announced her resignation from the board after making comments about Poland's part in the build up to World War II earlier this month.

The politician, whose federation represents ethnic Germans who were forced to flee eastern Europe at the end of the war, was accused of historical revisionism and said she felt increasingly isolated on the party's right.

Chancellor Angela Merkel has rejected a call from some party members to shift to the right. Merkel said she wanted to keep her Christian Democrat Party closer to the center to maintain a broad political base. (13.09.2010)

Christian Democrat Erika Steinbach has denied revising World War II history by naming Poland as the aggressor. Disgruntled with her party, she has threatened to resign and called for an ultra-conservative protest party. (11.09.2010)

Chancellor Merkel has defended party colleague Erika Steinbach, who resigned from the party's executive board over a comment about World War II. A statement on behalf of the chancellor said the remark had been distorted. (10.09.2010)