Mental health problems a growing issue for European teens: WHO 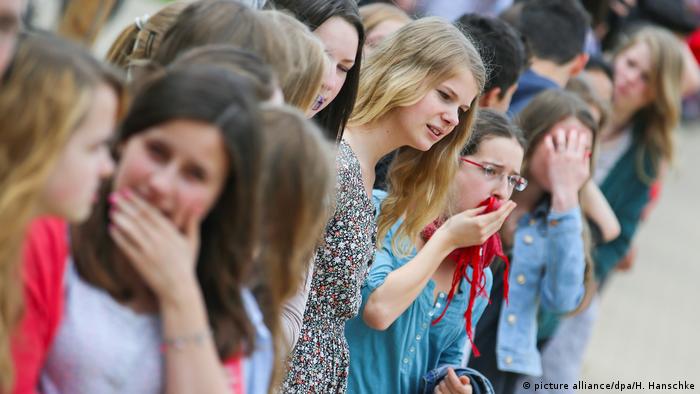 A rising number of European teenagers are suffering from mental health issues, according to a study by the World Health Organization (WHO) published on Tuesday. The study, known officially as the Health Behavior in School-aged Children (HBSC), reveals a decline in adolescent mental well-being in many European countries between the years 2014 and 2018.

Researchers looked at the health and social behavior of over 22,000 schoolchildren aged 11, 13 and 15 in Canada and Europe.

The results: mental well-being decreased as children age, with adolescent girls particularly affected. "One in four adolescents report feeling nervous, feeling irritable or having difficulties getting to sleep every week," the study said.

Researchers also noted differences between genders that varied according to age and socioeconomic status. In over a third of countries, teens from low-income families were more likely to report multiple mental health concerns. Some 41% of boys said they felt mentally healthy compared to 33% of girls.

The number of children who felt pressure from schoolwork had gone up in a third of the countries examined, the study said. More than one in 10 students reported they had been the victim of cyberbullying in the two months leading up to the study.

"That increasing numbers of boys and girls across the European region are reporting poor mental health — feeling low, nervous or irritable — is a concern for us all," said Hans Kluge, WHO regional director for Europe.

Kluge called for greater access to mental health services for teens, saying it would pay off threefold in "health, social and economic gains to today's adolescents, tomorrow's adults and future generations."

Drinking and smoking on the decline

The study also examined internet and social media use among adolescents in 2017 and 2018. Some 35% of teens were considered "intensive" social media users, with 15-year-old Italian girls leading the way at 63%, compared to 12% of 11-year-old Albanians on the low end of the spectrum.

Researchers also noted differences in internet usage that changed according to age and gender.

Both smoking and alcohol consumption have gone down since the last study, the report showed, with 35% of adolescents saying they had drunk alcohol, compared to 38% in 2014.

Two-thirds of teens reported using protection in their most recent sexual encounter. Among 15-year-olds, 24% of boys and 14% of girls said they had already had sex.

Wash your hands, keep your distance, be flexible: These are difficult for many, but, for many people with mental illnesses, these can be a huge problem. We fear for our lungs — and forget the most vulnerable among us. (01.04.2020)