The latest series by Finnish photographer Miia Autio deals with the displacement of the Rwandans refugees who came to seek new life in Europe after the atrocities of the civil war and the subsequent genocide.

On April 6, 1994, the Hutu population of Rwanda began the systematic killing of Tutsi people. The death toll of the 100-day-long conflict, known today as the Rwandan genocide, is appalling even in the context of the bloody history of the country: According to various sources, the number varies from 500,000 to almost two million victims. In addition, around two million people abandoned their land during and shortly after the warfare. The current dismal political situation continues to force Rwandans to seek a new home in surrounding African nations or Europe.

The roots of the tensions between the Hutu and the Tutsi date back to centuries ago. Social inequalities between the two populations emerged with the foundation of the Tutsi monarchy, which asserted pro-Tutsi and anti-Hutu policies, despite the fact that the Hutu constituted the majority of the state population.

Belgium, which took over the rule of the territory colonized by Germany in the 19th century, added fuel to the fire by declaring the Tutsi racially superior. The privileged status of Tutsis persisted even under the Belgian rule, which administrated the region from 1919 to 1961, the year Rwanda declared its independence. The ensuing, ceaseless line of guerrilla combats, riots, and revolutions led to a civil war in the early 90s and eventually the events of the genocide.

Miia Autio is a Finnish photographer and the author of "I Called Out for the Mountains, I Heard Them Drumming," shown in the gallery above. The collection of images portrays Rwandan refugees living in Europe juxtaposed with shots of their native land. DW discussed the series with her as she was opening her exhibition. 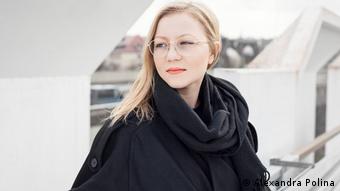 DW: How did you choose the name for this latest project of yours? It sounds quite poetic in contrast with the life stories of the people it tells.

Miia Autio: The name comes from an old Rwandan saying: "The drum is greater than the shout." In the proverb, the drum stands for the former kings of Rwanda, and the shout symbolizes the voice of the people. It means that in Rwanda, the state always has more power than the population, and in my series, I let the Rwandans have their voice be heard. After all, Rwanda's current policy denies its people their opinion, so they have to run away if they want to express it.

For a series that is linked to the Rwandan genocide, you chose to portray mostly Hutus. Why?

I believe this is a part of the history that is not often discussed; Hutu politicians were also persecuted and killed during the genocide. It is a truth hidden in the statistics, and it's something the present Rwandan government doesn't want to acknowledge. The people lost their friends and families, but they are not allowed to mourn or to remember them because they weren't officially killed since they were Hutu.

How did you contact and meet the protagonists of the series?

I was living in Germany in 2006, and I was working with immigrants. I wanted to study sociology at that time, and I met one guy from Rwanda who was a sociologist, so we started talking about the political situation in Rwanda and eventually became friends. Over time, I got more and more interested in the topic, and when I came back to Germany years later, I decided I wanted to commit to the idea. He helped me a lot to find contacts and approach the people.

How do these people feel about Europe, their new home?

They are very happy that they got this opportunity to start a new life in a peaceful country and that they were accepted, of course. They can work, they can study, they can travel - most of the people I worked with are not Rwandans anymore, they are citizens of the European Union. Certainly, they face discrimination or prejudices sometimes, but everybody does to some extent. When I moved to Germany, I also had to overcome various obstacles.

You traveled to Rwanda to shoot landscapes that refer to the origin of the characters in your series. Did you talk about the political situation with the people there?

Yes, I did, although I was told to avoid discussing political issues. It was weird because I had studied the history of Rwanda, and I knew what was going on in the country. My guide who was a Hutu, however, told me how he wasn't allowed to participate in some classes at the university and that it was impossible for him to get a proper job because of his origin. And he couldn't even speak about his problems.

In Rwanda, you can feel the fear. Some people told me how much they loved their democratic country, but I never knew whether that was their real opinion or if they were just afraid.

What did the whole experience mean to you?

It changed the concept of home, which, to me, is now more of an idea rather than a particular place.

Miia Autio's "I Called Out for the Mountains, I Heard them Drumming" is on display in Galleria Uusi Kipinä in Lahti, Finland, until April 30, 2017.

Television is a main source of news for communities across Africa, but it's not accessible to everyone. Deaf people, for one, often miss out. A young journalism team from Rwanda has decided to tackle the problem. (26.09.2016)

The skulls belong to east Africans brought to Berlin during the colonial era for racial "scientific" research. Recently, Germany has been prompted by former colonies to return the remains of indigenous inhabits. (23.11.2016)