The book penned by an imprisoned Adolf Hitler in the 1920s has re-entered the public domain. The new critical edition - replete with copious footnotes - is the first edition put on sale in Germany since 1945. 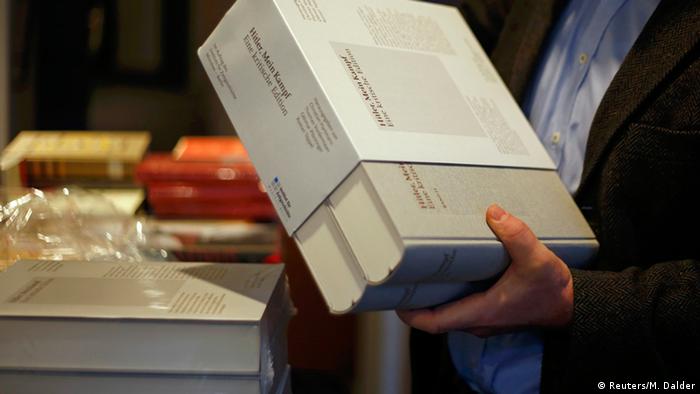 A heavily-annotated new edition of Adolf Hitler's "Mein Kampf" hit German bookstores on Friday for the first time since World War II. As the copyright expired, German researchers in Munich presented the 2,000 page version (more than double the original's length) which has been in the works since 2009.

The state of Bavaria was handed the rights to the work by the victorious Allies in 1945 and held off publishing the anti-Semitic manifesto in deference to the victims of Nazi atrocities and to prevent inspiring racial and religious hatred.

Despite the ban, it was widely available online - a point used by the Institute of Contemporary History of Munich (IFZ) to defend its new reprint. Better to "deconstruct" the myth and "put into context Hitler's writing" with the appropriate scholarly comments, according to the IFZ.

Editorial team leader Christian Hartmann said only a properly annotated edition could show the public how "aggressive the hate sermon" in the book truly was.

Prominent British scholar Jeremy Adler was of a very different mind, however. The expert on German literature said in an interview on Deutschlandfunk radio that "the virulence that once was bound to this book is still there."

"This book is still dangerous," said Adler, who went on to accuse the IFZ of seeking "success" with the book, knowing full well they could publish a free annotated edition online without the 59-euro ($64) price tag.

Josef Schuster, the president of Germany's Jewish Council, told broadcaster NDR that he welcomed the publication, saying it was important to "undo the myth of this book" and illustrate how "completely wrong and ridiculous Hitler's theories and theses were."

Many in the Jewish community remained wary, however, of seeing "Mein Kampf" readily available in bookstores. In an interview with French news agency AFP, World Jewish Congress President Ronald Lauder said he failed to see why a critical edition was necessary - especially compared to "other works that truly deserve to be republished as annotated editions."

The part autobiography, part manifesto tome was penned by Hitler in 1924 while he imprisoned for his failed 1923 coup attempt known as the Beer Hall Putsch.

Prior to the end of World War II, some 12.4 million copies were published in Germany. Since the copyright fell to Bavaria, it was only available in second-hand bookshops, libraries, and more recently, online. The reprint in annotated form was triggered in part by the expiry, after 70 years, of Bavaria's exclusive copyright on the material.

Opinion: Why Germany no longer needs to fear 'Mein Kampf'

An annotated version of Hitler's "Mein Kampf" goes on sale in Germany this week. Germany shouldn't be afraid of the book, says DW's Susanne Spröer, but should use it to prevent history from repeating itself. (07.01.2016)