Saudi poet Hissa Hilal created a whirlwind in 2010 with her poems criticizing religious fanaticism. The documentary The Poetess follows her life after the uproar, in a Saudi Arabia undergoing great change. 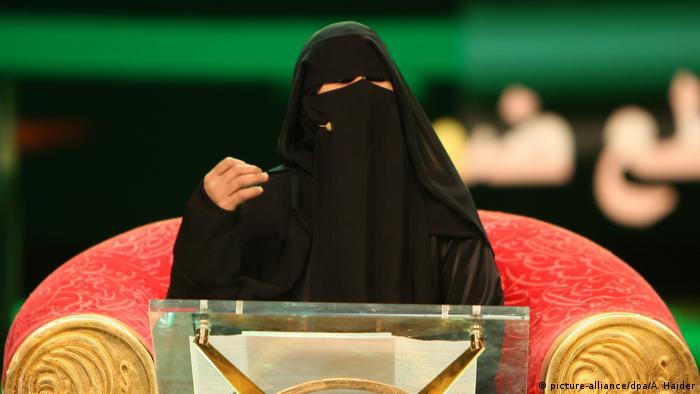 Hissa Hilal, mother of four children and officially a housewife, is a very brave woman — and the heart of the documentary, The Poetess.

Originally from Saudi Arabia, Hilal took her poetry to a United Arab Emirates a popular reality TV show called Million's Poet. Her lyrical efforts were broadcast across the Arab world.

In The Poetess, German filmmakers Stefanie Brockhaus and Andreas Wolff capture Hilal's story. Her poems speak out against religious extremism and fatwa culture — lyrics which resonated with global media. But along with support, Hilal also received death threats afterward.

DW spoke to Andreas Wolff about the film covering these events and the difficulty of filming in the arch-conservative country.

DW: Mr. Wolff, how did you and Stefanie Brockhaus come across the story of Hissa Hilal?

Andreas Wolff: In 2010, we were in the US at a film festival to present a different film and at the time, there was intense reporting on Hissa in media outlets like The New York Times and The Washington Post. We saw this photograph of her on a stage in a television studio — this totally veiled woman, of whom only the eyes could be seen — and the scroll on the screen read, "Saudi housewife criticizes the most important Saudi cleric."

It was such a stark image. It was clear then that it would make for a great documentary — if she was willing to work with us.

We got her telephone number relatively quickly. And she said we could meet with her to discuss while she was in Abu Dhabi, but she was only there for three more weeks. We flew there straightaway. There was so much commotion there — with the competition and the media uproar surrounding it that we just ran after her with our cameras. 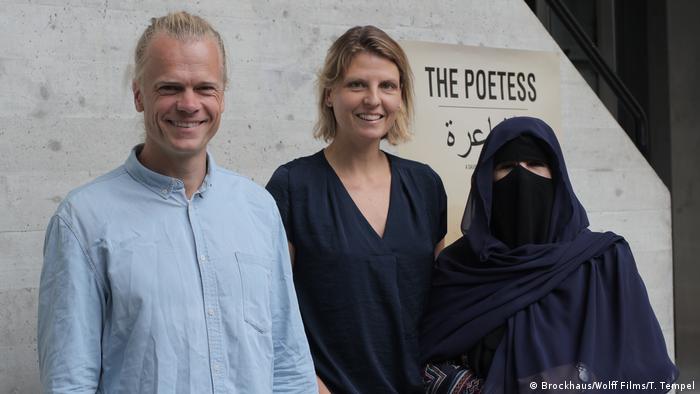 The directors of The Poetess with the film's protagonist: Andreas Wolff, Stefanie Brockhaus and Hissa Hilal (L to R)

You were at her side from the beginning?

Not the beginning exactly, but right away we knew we weren't just going to interview her and move on — that we were more deeply interested in her story. And that made her curious. She didn't know exactly what that would mean but it was a first step. At the end of the show, we were all sitting with her in the hotel and she showed me her face. I was so happy that she did so, as showing her face was a sign of how much she trusted us. That was wild.

That's how it all began. Afterward we wanted to visit her at home in Saudi Arabia but that took a very long time. Just getting the visa took a year, because the country is so closed off. Then the filming had to be pushed back due to the difficult requirements. The film sat there for four years because we couldn't get into the country, because it took forever to get permission from officials to film there.

How tough was the actual filming there on location? What did you need to be aware of?

The law has it that all women need to wear an Abaya and a Hiqab [ed. note: the black robe and face veil, respectively] and Stefanie, the co-director, had to as well. Our head of production, Amr Alkahtani[who co-produced the German-Saudi movie Wadjda] , thanks to whom we were allowed to film, was present at all times. He could read the situation.

At the beginning of our filming, it was difficult with Hissa, who comes from a very strict, traditional Bedouin family. But there are other women in Saudi Arabia who had been active, who studied in the US and are engaged. So we considered the possibility of having other women step in front of the camera and show their face. There are so many exciting things happening in the country.

Normally, filming brings you quite close to the protagonist but in this case, your protagonist has everything but her eyes hidden. How did you overcome that?

One step at a time and with a lot of experimentation. We decided at some point that we would film a long interview with Hissa in which she told her own story. And we wanted to film it in such a way that we can see her eyes well, that she looks directly into the camera. That worked relatively well. 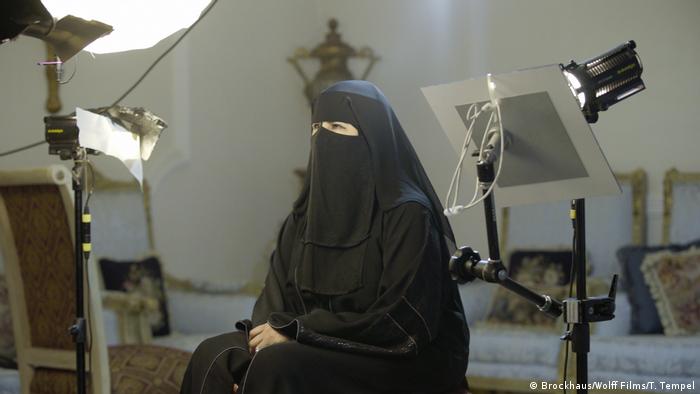 Did you experience any of the current sentiments about a reform taking place under Prince Mohammed bin Salman while you were there?

That process has been in development for years and there continue to be these little openings. A few years ago, there were plans for the King Abdullah University for Science and Technology (KAUST) in the works, a modern university in which men and women would study in mixed-gender classes. In order to accomplish that, King Abdullah had to make an unbelievably large number of concessions to the religious leaders. And it was said that it was as a result of this university that the discontinuation of the ban on women driving was pushed back. 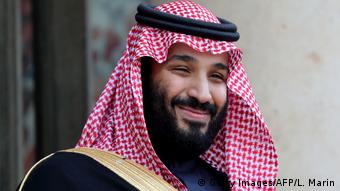 There's always this back and forth, this negotiating with the religious heads. They are responsible for education and they influence the opinions and beliefs of children from elementary school on — an extreme form of brainwashing. This element in the society is not being modernized in any way at the moment, something which has been completely missed by our media. It may be that they discontinue the ban on driving yet at the same time, most women wouldn't trust themselves to drive because they don't know what consequences might come as a result of their doing so.

Was Hissa not permanently filled with fear after her television appearance?

She did not name extremists or concretely use the cleric Abdurrahman al-Barrack's name but rather in her poems she fundamentally railed against the radical separation of the sexes. She said that this idea of separation is un-Islamic and does not correspond to the Koran. She may not have named names but everyone knew who she was referring to, and in 2010, he called for a fatwa. He said that the mixing of genders was un-Islamic and that if men and women were to be together, they were not conforming to Islamic law and that it was okay to kill those who did so.

Hissa said afterward that someone who says something like that, stirring up hate, is responsible for the fact that Muslims are so feared in the rest of the world. She was so clear in her thinking and came across as firm in that belief and then realized in her interviews that a majority of the citizenry is behind her. For the religious it became difficult to attack her because she knew that she had so many people behind her. She knew exactly that she was hitting a nerve and was confident that she was in the right. That gave her courage.

How has Hissa reacted to the film?

She was in Locarno at the premiere and thought it was great. It was her first time in Europe. And to stand there in the front of the cinema, filled with people and respond to their questions was something she really enjoyed. She also liked the film – she saw it ahead of time and it pleased her.

What was especially impressive to you about the people in Saudi Arabia?

I really liked how the Saudis we met there were really hospitable and ready to help. It is really easy to get them to come out of the hard shells imposed onto them by society and into conversation. It feels like everything there is so strict and yet there are many encounters if you just dare to look people in the eye.

Why did you want to make this movie despite all the difficulties?

With our film, we wanted to bring the veiled woman to the people of the West. Even if someone wears a veil, she can be very personable. Veiled women are repeatedly associated with extremism. Yet the Saudi people often disagree with the religious. The vast majority of people there would hope to have a greater exchange with the West.

Saudi blogger Dahlia Rahaimy: 'I write what needs to be said'

For the first time in 35 years, Saudis can go to the movies again in their country, part of a drive to modernize the arch-conservative desert kingdom. Saudi blogger Dahlia Rahaimy told DW how important the reforms are. (19.04.2018)