Medvedev defends Russian progress on path to democracy | Europe | News and current affairs from around the continent | DW | 10.09.2010

Russian President Dimitry Medvedev has defended Russia's progress on the path to democracy after a history of authoritarian rule. He rejected calls for a new political system with reduced presidential powers. 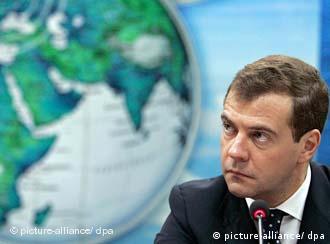 Russian President Dimitry Medvedev has hit out at criticism of democracy in Russia, and accused critics of failing to take account of Russia's authoritarian history.

At an international policy forum on Friday, Medvedev also said that Russia's system of government did not need a major overhaul. 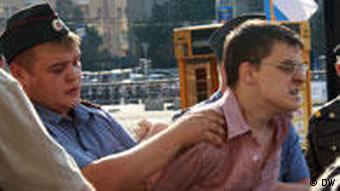 Demonstrations by opposition groups are often broken up

Medvedev told the gathering in the city of Yaroslavl that rule by the tsars and the Soviet leadership meant that Russia was "a country with a thousand years of authoritarian history," only starting out on the path to democracy.

"There has practically never been democracy in Russia," said Medvedev in response to criticism that Russia was not making enough progress in establishing a fully democratic society.

"I would really like those who are going to assess Russian democracy to pay attention to our history and the path we have taken over recent years and for them not to judge us too harshly," Medvedev said. "There is democracy in Russia. Yes, it's young, immature and inexperienced but it is democracy. We are right at the start of the road."

Critics say Russian authorities have failed to ensure free and fair elections and that police routinely breach human rights. Medvedev dismissed concerns about free speech and assembly, telling the meeting of experts that both were practiced in Russia "within precisely established legal limits."

The president said that the system of government did not need radical reform and that moves to establish a parliamentary democracy, with less power for the president and more for parliament, would prove disastrous. He said that similar reforms being introduced in neighboring Kyrgyzstan were doomed to failure. 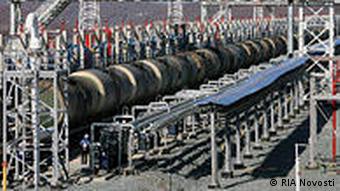 Medvedev hopes to reduce Russia's reliance on oil, with more emphasis on innovation

"We are told about parliamentary democracy, and our Kyrgyz friends have gone along that path, but I can tell you that for Russia, as for Kyrgyzstan, I am afraid this would be a catastrophe."

Medvedev also spoke about his goal to modernize Russia end corruption and reduce the country's economic reliance on hydrocarbon reserves.

Medvedev expressed concern that Russia was too dependent on world prices for oil and gas. The economy is growing again after contracting by 7.9 percent last year - its worst annual performance for more than 15 years. "We need to change the structure of the economy otherwise we have no future," he said. "We are not in the condition to stand still any more."

Medvedev said he would create an innovation-based economy and affirmed that freedom for Russian citizens was necessary to achieve this.

Liberals had hoped that Medvedev, touted by his supporters as a modernizer, would introduce major political reforms when he took over from Vladimir Putin, who is now prime minister, in 2008. However, the president is widely viewed as having been slow to introduce changes.

Medvedev's expansion of security powers sparks fears of a crackdown

Faced with a simmering, underground opposition, Russian President Dmitry Medvedev has expanded the powers of the country's Federal Security Service (FSB) in a move which critics have called a "danger to society." (05.08.2010)

President Medvedev's bill to increase secret police powers has won parliament's approval. Human rights activists fear the government may use the law against the opposition, returning to a Soviet-style police state. (19.07.2010)