Mayor of Gdansk dies of stab wounds after attack

Poland's health minister told local media that Gdansk's mayor died in a hospital after being stabbed at a charity event. A man accused of carrying out the attack is in custody.

Hundreds of citizens of Gdansk turned out on Monday evening to mourn the death of the city's longstanding mayor, Pawel Adamowicz, who was stabbed on stage at a charity event on Sunday.

Adamowicz was a former member of the Civic Platform party, Poland's previous government before the Law and Justice (PiS) party came to power in 2015.

Mourners held candles and some in the crowd held a sign that read "stop hate." 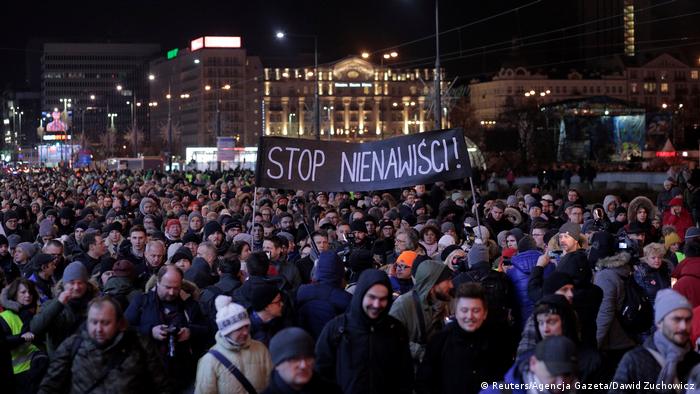 The president of the European Council and former prime minister of Poland, Donald Tusk, reacted to the news with a message on Twitter.

"Pawel Adamowicz, Mayor of Gdansk, a man of Solidarity and freedom, a European, my good friend, has been murdered. May he rest in peace," Tusk wrote.

"We are profoundly saddened and shocked at the death of Pawel Adamowicz, the mayor of Gdansk," German Foreign Minister Heiko Maas wrote on Twitter. "Our thoughts at this time are with his family and friends. We stand in solidarity with our close friend and neighbor, Poland."

Polish President Andrzej Duda opened a news conference with a minute of silence in memory of the Gdansk Mayor. Duda said the attack was an "evil hard to imagine" and a "blow to our community of people who want to do good."

He called Adamowicz a "truly great human being, a great politician and great resident of Gdansk."

Gdansk lowered its city flags to half-staff, following the news of the death.

Political tensions have picked up in Poland in recent years, after PiS won a heated 2015 election in which the Civic Platform lost almost three-quarters of its seats in parliament.

A contentious PiS program of government, coupled with ongoing criticism of the previous government, continue to divide the electorate.

Who was Pawel Adamowicz?

As Gdansk's mayor since 1998, Adamowicz was one of Poland's progressive voices. He supported sex education in schools, LGBT rights and tolerance for minorities.

He had also advocated bringing wounded Syrian children to Gdansk for medical treatment, a plan that was blocked by the PiS government.

Adamowicz's political career began in the 1980s, when he was part of the democratic opposition formed in Gdansk under the leadership of Lech Walesa.

Born in 1965, he won a total of six terms as mayor, the most recent secured late last year. He ran as an independent in 2018, but remained critical of the PiS government.

His wife Magdalena is a law professor at the University of Gdansk; they have two daughters, Antonina and Teresa.

Polish prosecutors say the suspected attacker, a 27-year-old, is being investigated for murder and will also be subjected to a psychiatric examination.

If convicted, the attacker could face a punishment of life in prison.

Polish Justice Minister Zbigniew Ziobro said prosecutors were looking into the suspect's criminal record. He is said to have been convicted in relation to several bank robberies and has reportedly spent more than five years in jail.

Why Poland's government is up in arms about a children's charity

A prominent mayor's murder at Poland's largest charity event has put a spotlight on the country's conservative government — and how a fundraiser collecting money for hospitals could be a thorn in the government's side. (14.01.2019)