May Day Protests Turn Ugly in Germany and Elsewhere in Europe | Europe | News and current affairs from around the continent | DW | 01.05.2008

Thousands rallied across Europe Thursday, May 1, in traditional May Day protests on issues ranging from pension reforms to living standards. However, violence flared in German cities and others across the continent. 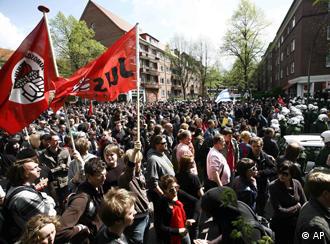 In Hamburg, police said at least six cars were set on fire as the violence spread. Police used water jets mounted on heavy trucks to open a route for 700 far-rightists. Leftist organizers said they had 10,000 supporters at the scene determined to halt the parade.

The anti-immigrant NPD, which has sought to present itself as a voice of the poor, staged labour-day parades through an old-time working-class district of Hamburg and through inner-city Nuremberg, the city adopted by dictator Adolf Hitler as the home of his Nazi Party. 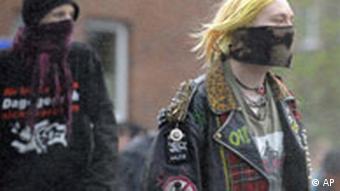 Thousands of police were sent to the two cities to prevent clashes between the NPD and the "Black Block," a loose movement of often violent anarchists who last June led angry demonstrations against the Group of Eight [G8] summit in Heiligendamm, Germany.

At the same time, mainstream labour and religious groups held peaceful rallies at more distant locations to denounce the NPD.

In Hamburg and Nuremberg, the NPD marched between cordons of riot police ordered to enforce the NPD's right of free assembly. Anti-NPD protesters far outnumbered boot-wearing rightists in both cities.

The NPD parade in Hamburg was delayed by a series of small fires and scuffles between leftists and the police.

Police shut down a Black Block loudspeaker after an anarchist leader urged his supporters to link arms and resist the police.

Bavaria state's premier, Guenther Beckstein, who comes from the city, told a peaceful anti-NPD rally in another part of town that his government would use undercover agents, court challenges and youth education programmes to undercut the NPD wherever it could.

Nuremberg has created a guided tour of Nazi crimes in the ruins of a former Nazi Party park on the city fringe.

During the night, leftists had thrown stones at riot police on patrol near the inner-city Hamburg headquarters of the counter-culture movement. One policeman was slightly hurt. Police detained four rioters. The windows of a bank were broken.

Violence marred May Day demonstrations in other parts of Europe where labor issues dominated the protests. 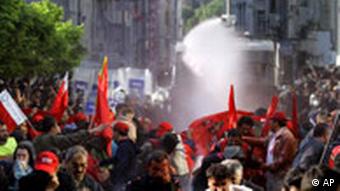 Protestors in Istanbul were tear-gassed by police

Turkish riot police clashed with demonstrators attempting to take part in in Istanbul on with some 467 protesters taken into custody and dozens of people treated at hospitals for the effects of tear gas.

In a series of clashes that began early on Thursday morning and continued until the afternoon, police moved in to disperse various groups who were attempting to march to Taksim Square in the heart of Istanbul, where May Day celebrations in 1977 ended with the shooting of 36 unionists.

Authorities in Istanbul had refused to give permission for a march to Taksim Square, instead only allowing union leaders to leave flowers at a memorial in the square. Union confederation leaders instead decided not to take up the offer.

In Russia, 10,000 people took part in May Day demonstrations against the rising cost of living and demanded wage increases.

In the western Siberian city of Chelyabinsk, union leaders criticized the fact that wages were rising too slowly despite strong economic growth.

According to police, some 7,000 people took part in a rally in the Revolution Square in Chelyabinsk, where speakers at the rally stressed that, despite economic growth; the incomes of a major part of the population were growing too slowly. 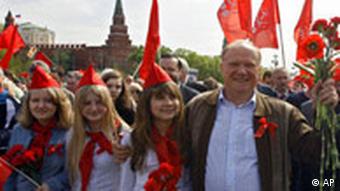 Thousands of Communists celebrated May Day in Moscow

Prices of essentials, tariffs, the value of services in the housing and communal economy, as well as transport fees, continue to grow, leading to a growth in social tension, the speakers said.

According to the Itar Tass news agency, participants in the rally adopted a resolution, demanding that the Russian and regional leaders take measures for curbing the growth of prices, establish state regulation of prices of socially important foodstuffs and other products.

In Moscow, amidst strict security, 30,000 people took part in various protests around the city. Communist party leader Gennady Zjuganov, addressing a crowd of around 4,000, demanded an increase in the minimum pension.

Many Muscovites complained about the strong police presence and the use of metal detectors and barricades in the city centre. According to official reports, a 320,000-strong force of army and police were on duty throughout the country.

Meanwhile in France thousands of demonstrators took part in May Day protests against the reforms of President Nicolas Sarkozy. 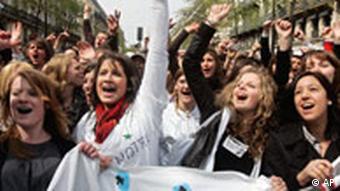 Students were out in force for the Paris protests

In Paris, the two large French trade unions, CGT and CFDT, held a joint protest for the first time in four years. Several thousand took part in a march which arrived at the Place de La Republique in central Paris in the afternoon.

The protests were directed against the planned pensions reform and the cost of living.

In the southern city of Marseille, police said that there were 3,000 taking part in protests, but the unions claimed that 30,000 had taken to the streets.

Demonstrations were also held in numerous other French cities such as Nice, Toulouse, Strasbourg, Grenoble and Lille. There were no reports of trouble.

The traditional May Day protest of the far-right National Front Party led by Jean-Marie le Pen was attended by 1,000 people.

In the Serbian capital Belgrade some 10,000 people marched in a call for better living standards in the economically struggling Balkan nation.

Representatives of the Workers' Union pointed to the "long, painful transition and privatization in Serbia" and said workers' rights had never been more under threat. 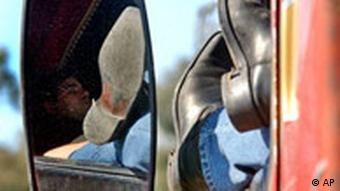 Transport ground to a halt when Greek unions protested

In Greece public transport services, and ships and flights by the state carrier Olympic Airlines were paralyzed across the country as unions planned demonstrations in the capital Athens to coincide with Labor Day.

Thousands of tourists were left stranded as Athenstram, trolleys and all buses, including those to and from Athens International Airport, stopped running while workers at the city's metro said they would hold work stoppages.

Dozens of domestic and international flights on Olympic Airlines were cancelled as were all ferry services to and from the Greek islands.

Greece's labor unions are angered by the conservative government's attempts to reform pensions.

Speaking at the main trade union rally of the day, Michael Sommer, chairman of the umbrella DGB labor federation, demanded a statutory minimum wage of 7.50 euros ($10) an hour. (01.05.2007)

Minor Violence Breaks Out in Berlin on May Day Eve

Clashes between party crowds and police broke out again this year during May Day Eve celebrations in Berlin, with over 60 people arrested. Other celebrations, however, were largely peaceful. (01.05.2007)

Are the traditional issues associated with the May Day rallies being overshadowed by regular violence? Please include your full name and country with any reply.